The Air India aircraft that brought me to London was huge – 10 seats in a row with two (a)isles, and they gave off free booze in the plane. Also, I might be a bastard when it comes to managing things on time (passport, visa or check-in) but most of the times, good wishes of friends and family do keep me lucky. In spite of the last minute check-in at the Chennai airport, I got window seats both for the Chennai-Mumbai and the Mumbai-London flight. By the way, let me tell you guys that the international terminal at Mumbai rocked – it truly was international (that I later found after checking out Heathrow).

When you realize that you are crossing the borders of your country for the first time, the feeling is very similar to that you have when you are having sex for the first time – it’s all about that mental acceptance that you are finally doing it – it’s an entirely different kind of pleasure, one of it’s own. I kept dozing off on the flight except when the smell of booze or food would wake me up. Every time I got up, I peeked outside the window to wonder which country I was passing by. I did see crazy contours down below and that included an infinite stretch of white-brown mountains partly hid by fluffy clouds but never could make out what country that was. Finally, I saw London – down below – such toy like beauty it had. When the aircraft finally landed, I knew I was no more a virgin. 🙂

I guess I did some mistake in choosing my room – it had two beds and both were double beds! 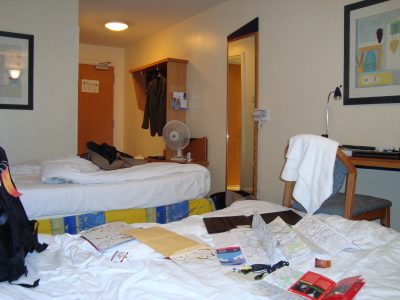 Yeah, there are the two beds! 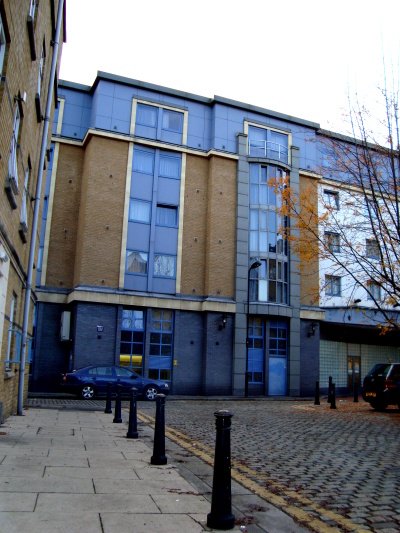 See the blue car? See the blue window column right to the car? See two large windows on the top of that column? The smaller windows just below that, belong to my room – room numer 405. 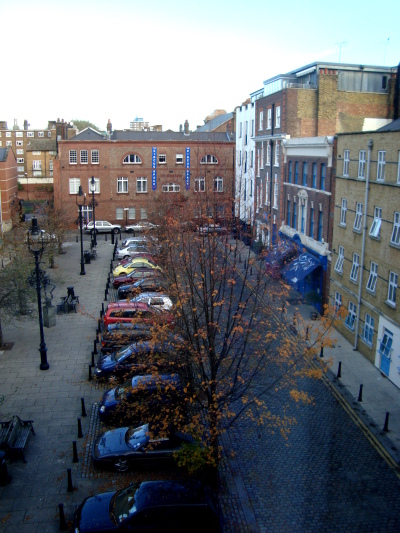 And this is exactly what I see when I look outside from the window in my room.

Must be a really big airplane if it had two “isles” 😆 Two beds, huh, let your imagination run wild, and let your luck follow!

hmm..nice nice… looks like u gonna have a great stay in London..

let’s hope for the best at least 🙂

too beds because in case she didnt want to share the same bed after you know what.. 😉

BTW, till when are you in London?

I am here till this Sunday Sumedh.

By the way, let me tell you guys that the international terminal at Mumbai rocked – it truly was international (that I later found after checking out Heathrow).
Is it a joke?

I have been there quite few times and compared to singapores Changi and HongKongs airport its a mess.