Coffee is costly at CCD here at Bengaluru Airport. Latte comes for 65 bucks and international for 100. I didn’t bother finding out the rate of the books at Odeyssey. I am in the departure lounge now and I don’t see any Odyessey here.

Convocation. It was an assembly of a bunch of excited IITians, all dressed in red gowns. SAC. Student Amenities Centre. SAC is the same huge auditorium inside insti, where all of us underwent orientation on our arrival to the campus in our first years. I still remember those millions of white floor-fans, placed between columns of chairs in SAC during the orientation, and later during several different events held at that place, the last being the Sharav Hostel Nite if I remember correctly. Many a times we had wondered how nice it would be to have AC in SAC. Finally, SAC has it. AC. In fact, the AC was made operational for the first time in my convocation. The 45th convocation of IIT Madras.

Anshuman, Tiwari and myself sat together, laughed together and received our degrees one by one. Tiwari, roll number 50, myself 51, Ansh 52. It was just like the first semester. Here is a picture of the three of us taken during the last few days of the first semester. 2003. 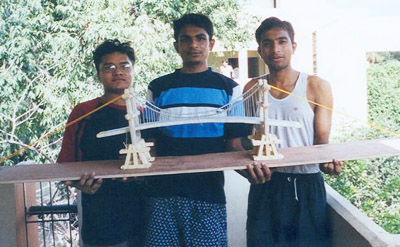 We had made this lovely bridge, that had gained fame in a short while in the entire Sarayu hostel. How can I, or anyone of the three of us forget how Ansh put his entire weight over the bridge to prove to an absent-minded prof that our bridge was capable of taking the load of one full overweight ( 😛 ) human-being. Do you know what that prof had told us? Since he is standing on one leg, only half of his weight is getting transferred to the bridge. LOL. Did she ever learn physics. She was a Chemical Engineering prof, and over a period of time we forgave her.

The remains of the bridge still exist. I own one pier. Ansh owns the other. The broken deck was handed over to Tiwari, and I am not sure if it still exists somewhere. It was the bridge that we shared then. It is the company that we share now. We are now post graduates. Here is the picture of the post-graduate troika. 2008. 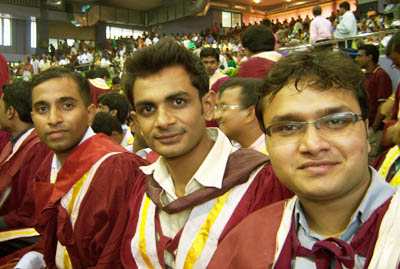 Ansh (closest to the camera in the above pic) called up just now. He is in Chennai. He hasn’t left yet. By evening he should be in Mumbai. He and some more friends had shown up at my place a day before the convocation. Tiwari and myself enjoyed cooking breakfast and lunch for everyone. The house suddenly looked all full and alive. If I feel sad at the fact that I am already away from Chennai, I feel sadder at the fact that Tiwari won’t have anyone in the house from tomorrow. The liveliness and the energy would be gone. Nothing in life is permanent, the more you live, the more you agree. 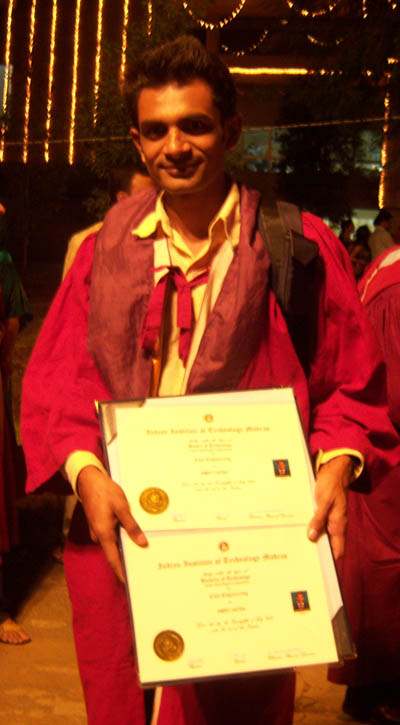 The five years that flew away, ended officially on the 25th of July 2008 when I received my birthday presents (two degrees). Three cheers to life.

12 replies on “The five years that flew away”

we don’t hv convocation in our clg 🙁 dey send it by post !

Dude dont they give you topi that you throw in the air while getting a group photo clicked?

This is one of the grimest post of yours. Sad and realistic.

Yeah that happens in most colleges. That’s fine. What’s the big deal about convo anyway? 🙂

We don’t get caps. Shukra hai we at least get gowns. I heard that IITB they show up in Kurtas for convocation.

congRaTulaTiOnS on being a part of the BIG DEAL!!! 😉

You shall be missed. 🙁

hi,
i am from tapti..
i ve been reading many posts in this…i think i can learn a lot from u and also this– http://www.vatsap.com

yaa and i agree…nothing in life is permanant

Thank you Vikranth. All the best for the new sem.