Basically, there were three main characters in Poda’s life, till of course Fuckbar happened: her dad King Bhaandmal, her mom Queen Padmavetti and her similar-aged cousin Prince Choosamal (who later grew up to be a look alike of Amitabh Bachchan, about which I shall talk more as the story progresses). Choosamal was an extremely sharp chap. His intelligence can be assessed from a small conversation between him and Poda, that followed immediately after an evil friend of Princess spilled colour all over her painting. 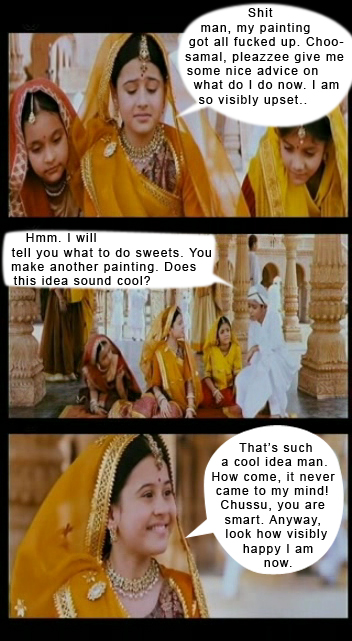 Like everyone else, Choosamal was slightly pained in life. His dad who was the original ruler of Kaam-air had died, letting Poda’s dad Bhaandmal takeover. He was doubtful about Bhaandmal letting him succeed later as the king of Kaam-air. However unlike Poda, he did not bring out his facial expressions that visibly. Let me move to Dalal’s story after throwing one last bit of trivia on Poda’s early years. Bhaandmal had engaged her to Ajaayabgadh’s prince Khatam Singh, even before her breasts were fully developed.

Alright, coming back to Dalaal, our main hero (yes, from now on I would refrain from calling him Fuckbar till, with the progress of the story, he finally gets the nick). Poor Dalaal lost his dad in 1555 and his kingdom was taken over by a desi ruler named Gaymu. To get back his kingdom, he fought the battle of Tannipat. Now Gaymu’s army was twice as big as Dalaal’s army. Also Dalaal was only thirteen years old then and could definitely not win the war.

Dalaal had a very trustworthy general called Beraham Kaun. Although Dalaal cursed him a lot from inside (because he would make him wear an extremely heave and uncomfortable metallic helmet), Dalaal needed him till he was big enough to handle things (and later, Poda) himself. 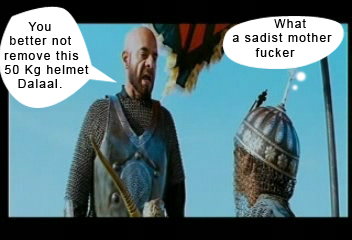 Beraham Kaun cracked a nice funda to win the battle of Tannipat. Gaymu, like every other gay had a nice sense for fashion. During the battle, he put on a sleek head-gear which showcased his eyes. Now, Beraham Kaun noticed this and got a helluva idea. He realized that Gaymu’s army would get too senti to fight the battle (even when it had double the Mughal’s strength), if it’s King lost an eye. So a Mughal sniper was hired to fuck one eye of Gaymu and weirdly enough, Beraham’s strategy worked perfectly.

Unlike his general, Dalaal was very raham-vaala and believed in the power of Kaho na Pyaar hai. He refused to behead Gaymu who had been captured as a prisoner of war. But then he was too small to stop Beraham from doing what he thought was good for the Mughals.

For the next six years after the battle, Beraham continued conquering more and more states, all in the name of Dalaal. By the way, six years were enough for Dalaal to get used to his helmet. He also grew up to become a tall and handsome man with a stupid mustache and funky side-locks. I am sure, Gaymu would have died to sleep with Dalaal, had he looked like this six years ago. Anyway, so one fine day after yet another small battle, as Beraham Kaun was about to behead the loser King, Dalaal asked Beraham to fuck off. He generally put some chumma vague fundays to his general. Basically he wanted to take revenge for all the years of carrying those 50 Kgs on his head, and that he did. 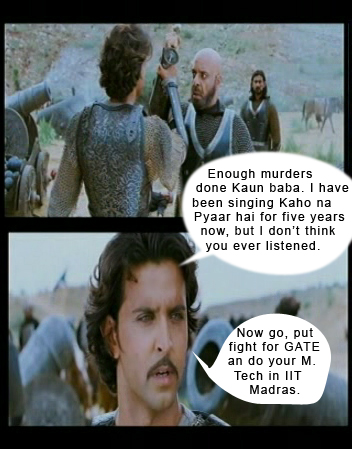 No one really knows whether Beraham Kaun ever cleared the GATE but rumors say that he later became the Chief Security officer of the institute. In the meanwhile, Poda had grown up to become a sex bomb and Choosamal, as I had mentioned earlier, a look-alike of Amitabh Bachchan. 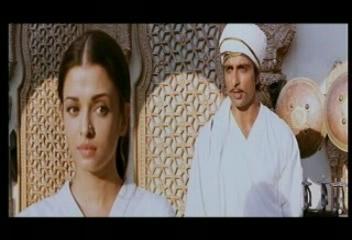 Poda had realized that she sucked at painting and had given up on it. She had taken up sword fighting as her hobby instead, but unfortunately sucked at that also. But since Choosamal, who himself sucked at sword-fighting, was her guru, both of them never really realized how bad they were at the sport (till of course both got fucked in different ways, as we will see soon).

That’s enough for part one. More shall follow in coming parts. If you enjoyed reading the first part of the epic love story of Fuckbar and Poda, do leave comments.

hahaha. the painting thing was pure gold. what an idiot

hmmm…. naishhh…
waiting for next

I so regret missing my first fifteen minutes to the movie man, when all this shit happened!

🙂 Thanks. Shall come soon.

Will try to set higher heights with upcoming posts on the series. 😛

But looks like u’ve tried too hard at being funny. Period.

I will try to turn you on fully with upcoming posts. At least I shall try. 🙂