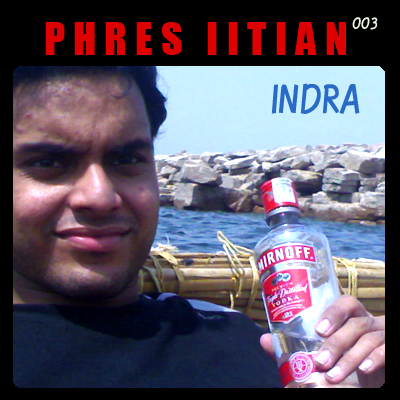 Sandeep Reddy Chillakuri, popularly known as Indra at IIT Madras passed out in 2006 with a B. Tech in Civil Engineering. Indra, or myndfcukd as he calls himself, is single and works in his home town of Hyderabad for Deloitte Consulting as a management consultant. In the Phres IITian series, Indra remembers his IIT days, reflects on his job and explains how an MBA is going to help him.

The worst thing at IIT to me, always was the education system. For an institute of its caliber, there needs to be more focus on innovation and flexibility.

Let’s begin with your IIT days. What is that one most important thing that you gained from IIT? The confidence.

Was all the fight to get in, worth it? Lemme see. Well, in a word, yes.

Worst thing about IIT? The worst thing at IIT to me, always was the education system. For an institute of its caliber, there needs to be more focus on innovation and flexibility. I am happy though that a lot of courses are now being designed in such a way. But many are still hungover with the traditional Indian – Teacher-student-mid sem-end sem system.

Worst thing? I can’t blame the department but civil engg is not exactly the “in” thing.

After about two years since you passed out, do you really give a damn to whats happening to IIT? I Sure do. How much ever I may crib about it, IIT made me what I am. I would love to be able to do anything that helps make it a better place.

Any specific example where being an IITian helped you? It got me a well paying job and a discount at a CAT coaching class.

Talking seriously, there sure is a respect that everyone around seems to give you. But something material, I cannot remember. So no, I can’t recall any one specific example as such, where being an IITian really helped me.

Alright, let’s move on to your work. You work as a consultant. What has been the most interesting project that you have worked upon so far? The most interesting ones are always those with an Indian connection. My vote would go to the one we did for a US pharmaceutical distributor looking to enter India.

Do you love doing what you do? A couple of months ago, the answer would have been “yes”. Now I’m not so sure. But it has more to do with the way I have alway been.

What plans next? Writing the CAT has been a yearly ritual. Hopefully, it’ll happen this year.

All the best for it. How do you think MBA at IIM is going to add value to what you are going to do next? There are two reasons.

Firstly, If I wish to continue in a management consulting firm, then I believe that an an MBA would equip me with the core and soft skills necessary for the same. I have realized that for a consultant, the most important thing to do is relations, a network, besides the core skills in analyzing a situation and potential future changes.

Secondly, I believe that personally I’m more inclined towards a more quantitative kind of environment than a typical consulting engagement. That kind of makes me look at the banks where a neat career switch would be possible with an MBA.

I have realized that for a consultant, the most important thing to do is relations, a network, besides the core skills in analyzing a situation and potential future changes.

A lot of young folks take up drinking and smoking on the pretext that its essential in corporate world. What do you have to say to them? Stop making excuses. Smoke and drink, if you want to. The only thing essential in the corporate world is your relationship with people, the networks you build (besides your work of course).

Besides, heavy drinkers always like to have a ‘connectible’ teetotaler around.

It’s time for the bigger questions now. What’s your ultimate purpose in life? Get filthy rich and then give it away.

Jokes apart, my ultimate purpose is to get rich.

When you say giving away, you mean giving away to your sons and daughters? (LOL) No give away for good.

Helping your kids is not a good thing? It sure is. But I guess, when I say I want to get very rich, I guess what I’m inherently thinking is that I should be able to provide to my kids with much beyond what my parents did. I guess thats where all progress comes from. Also, I guess I’m being selfish right at the end. Giving away is more fun.

You said earlier that you like being more quantitative. Talk in money terms. HOW MUCH? Lemme just say enough so that I’ll never need to make a choice.

I suggest you stay at consultancy

Why don’t you marry?

Where did marriage come from?

Guys do marry. What are you waiting for? The right girl.

This is the best of the 6 so far… Some quotes are pure awesomeness here.. Go Indra…

1. I guess once I die, I’ll be bored of death too!
2. Besides, heavy drinkers always like to have a ‘connectible’ teetotaler around
3. Lemme just say enough so that I’ll never need to make a choice

You must be glad to know that Indra is about to finish one year at IIM Ahmedabad.