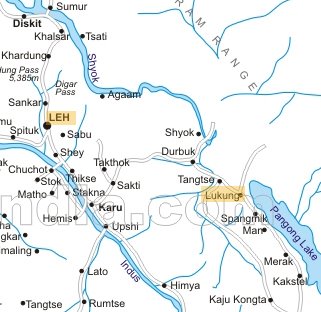 We got up early and some of us did take bath. At about six in the morning, we said good bye to mom, and then vrooomed away. Pangong lake was about hundred sixty kilometers from Leh and we intended to be back before sunset. 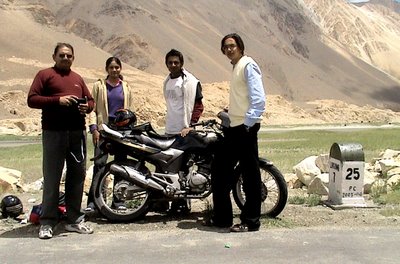 The riders: (from left) Dad, Sis, Myself, Bro

It was a supernatural ride, one of its kind. We kept driving in valleys for the first thirty kilometers or so; myself & bro on the Pulsar and Dad & Sis on the CBZ. The road was smooth, and the landscape simply mind blowing. We crossed the famous Indus Valley, at an average speed of more than fifty kilometers per hour. 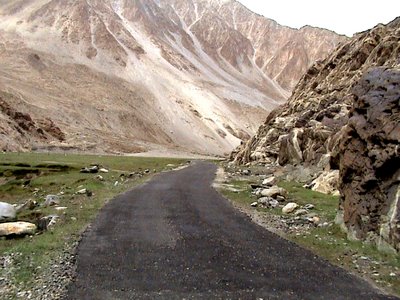 A view of the road running in the Indus Valley

The visually delightful route from Leh to Pangong lake, offered a couple of tourist attractions as well, including the biggest monastery of Ladakh in Hemis along with several other monasteries like those in Shey, Thiksey etc. Our initial plan was to cover all of them en-route. 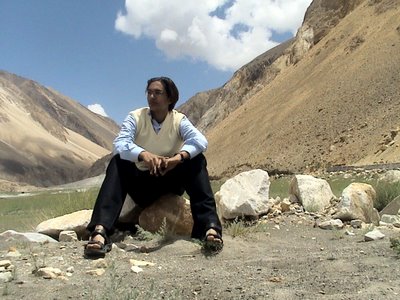 Thiksey monastery was the first attraction that came our way. We spent some time there, but didn’t go inside. We admired the strucure from close quarters, took some pics and then moved on. After crossing the town of Karu, the valley ended and the hills started. The average speed slowed down to about twenty kilometers per hour and soon it became clear that there was no way we could return to Leh before sunset, if we kept on visiting the many ‘side-attractions’. So it was decided that we would no more stop except for small tea breaks. 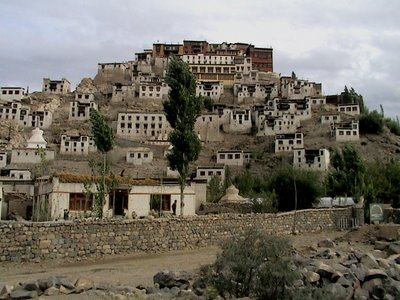 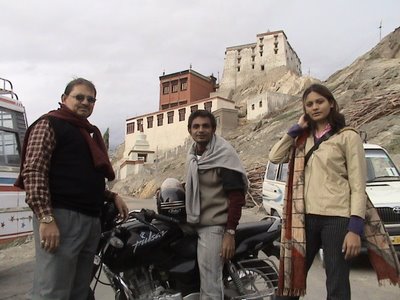 The hills never ended till about the last thirty kilometers. While climbing the hills, we crossed the 18000 ft altitude, and then things got a way too cool for us to handle. We had forgotten to put on gloves, or even carry a pair. So once the temperature fell down, and by that I mean close to may be two or three degrees (my bro kept claiming it was minus), the hands started freezing and went deep red. Driving became hell and all of us started shivering and shaking. But we kept driving; driving through the clouds literally! We kept on praying that the downhill begin soon, but that was not to happen for quite some time.

Finally, the altitude began to fall, it became sunny, and in fact the air got pretty warm by the time we reached Tangste. At a lovely spot with white hills around us everywhere, we had our breakfast. By the way, I forgot to tell you that since the never-ending hilly roads started, Dad and sis kept insisting that we scrap the idea of travelling all the way upto Pangong. Dad would spot a huge snow burried rock facing us and immediately suggest that we go there, have some fun, and then start the return journey. But I had kept on dragging on and on, reasoning that we had enough time. Dad had then set a target of 12’o clock: wherever we reached by that time, we would stop and return. I knew his fear. With a bike with no lights, we HAD to get back before the sun could say us good bye.

It was twelve o clock finally, and no, we had not yet reached the lake! But then, it was pointless to return back after joureying more than hundred kilometers and crossing the beautiful but tough hills. And so, we continued! 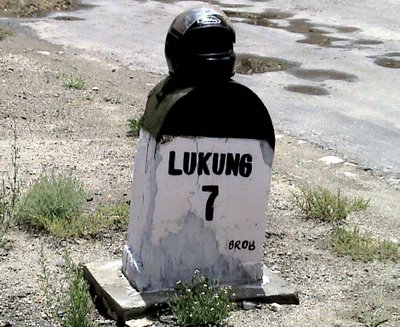 Lukung was the last town encountered, from where the lake was about ten kilometers away

After a seven hour interesting, stimulating, mind capturing, dilemma ridden, and above all exotic mobike ride, we reached the lake finally. And what a lake. Oh my God! This lake which holds the record for the highest altitude brackish lake at 14,256 ft above see level was the most beautiful water body I had ever seen with my eyes. It simply rocked! The more than hundred fifty kilometers ride, was worth it. The deep blue water of the lake reminded me of granita! 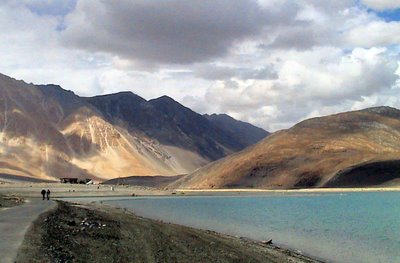 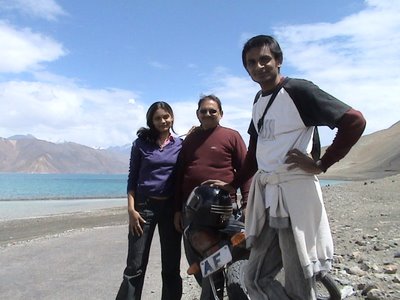 After chilling there and some more photosession, we hurried our way back to Leh. Somehow we knew it would take not more than five hours for the return trip. Afterall we had got an idea about the terrain now, so we would be driving faster.

Initially our assumption appeared true. We were driving faster, though carefully of course. And then those hills came again. And then, nature decided to join us in the fun ride. It started raining. And it started getting cold. We didn’t have raincoats. And we also didn’t have time to stop! Within fifteen minutes things got severe, way too difficult than it had been in the morning. Driving through the icy downpour in an uphill ride, was like tearing your way through an iceberg! And we had no other option but to do that. Well, this was the real Ladakh! But it really went too out of control, when ice repaced the water. I could see small pellets of ice pieces depositing on my already-dead-by-then hands melting slowly, killing a million cells of the epidermis. I feared frost-bite, but that never happened to my relief. 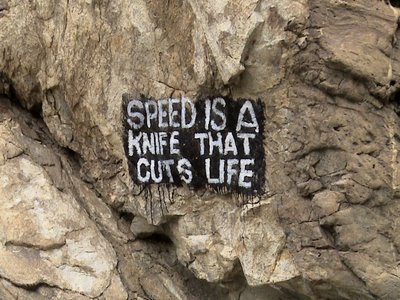 One of the many safety signs painted on the rocks

Sis spotted some local campers, and we asked them to give some plastic sheets which they luckily had. But by that time, the rain and hail storm had almost subsided. After a while, it became normal, and we picked up speed. Riding and riding, and enhaling the pure air that weaved magic all around, we finally reached Leh by seven. The sun said us good bye only when we were settling bills in the rent shop.

The last day was over, and it had already etched a never to be forgotten story in our hearts. Mom was so happy to see us back! Well it was time to do the packing for the morning flight the next day.

I will never ever forget my Ladakh trip. Hope you had fun too! 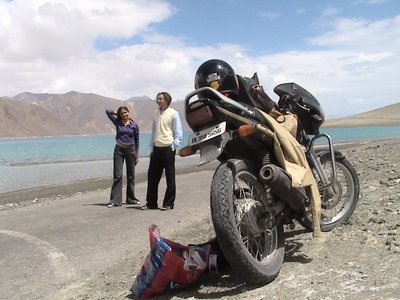 9 replies on “Ladakh: the last day”

The Panagong lake picture is AMAZING!

super trip you had da!
totally jealous of you now. 🙂

we should do something similar with our wing junta before we all go away!

The Pangong lake was much more AMAZING. You gotta see it someday.

Had fun reading about ur trip to the lake. Got much needed info too. We are a group of five leaving for Leh this weekend. And we’ll make sure we pay a visit to this lake. Btw, does one require a driving license for riding the bikes?

Hey thanks. Hope you have a nice time in Ladakh. No, they don’t check any papers anywhere there. At least that was the case two years back.

Me, my wife and 11 yr daugher are planning to go to leh around 15 august for 4 nights. Can someone tell me a good hotel to go to and what places to see

You may stay at Junaid Guest House which is near the polo ground, Leh. The rooms are cheap and well furnished. We stayed there for 5 days. They’ll provide you with food also if you so wish.