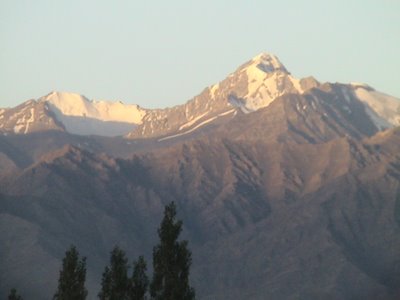 An early morning view of the snow clad hill tops in Leh. Pic was taken from the bus-stand

Please forgive my slow rate of posting. A new sem brings with it so many complications that it takes quite an effort to make a post.

We got up early in the morning to catch the early morning bus for Nubra Valley. The bus left Leh at 6:00 AM. The ride was mind blowing. It was the best bus ride that I had ever experienced. It was long, and I enjoyed each and every minute of it. As the bus kept on climbing the brown hills, the temperature kept sliding down. The highest point was when we crossed 18000 feet and it was fun. I was in ‘high’ spirits. 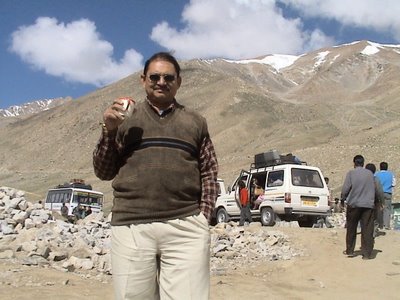 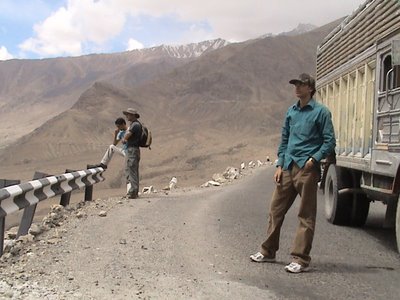 Bro enjoying the hill side view. The bus had to wait for nearly half an hour during the onward journey as the millitary guys were repairing a stretch of the road.

We left the bus in Diskit after a little more than six hours of ride. Diskit is the biggest town in Nubra Valley. And it was one of the smallest towns I had seen. We hired a taxi there, and found a hotel. Mom hates travelling. She had been sleeping all the way during this bus ride, and she wanted to take some more rest. So she crashed in the hotel room, while the rest of us went to see the famous hot spring and some monasteries in the Nubra Valley.

The hot spring sucked. It was not worth travelling another one and half hour in a taxi, immediately after an amazing-yet-tiring bus ride just to see a sucking hot spring. But once again, the view outside the window of the car was just too awesome. Ladakh is about enjoying your rides more than anything else. It’s like a dreamworld. You have to love the beauty of the natural landscape that surround you as you keep travelling on roads. 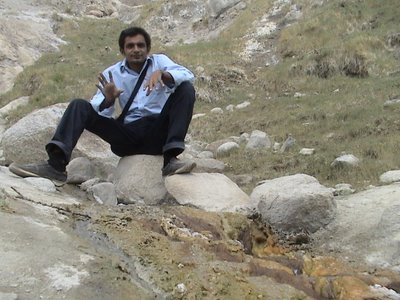 I am sitting here over the sulphur rich hot spring that sucked. You have to be a Geologist to appreciate the beauty (if any) of it. I am not one! 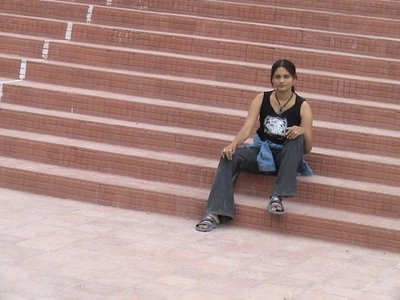 Sis found time to relax on the staircases of a monastery that we visited while returning from the Hot Spring.

The next site on list was the camel safari. The taxi had to come back all the way to Diskit, to go there. We went back to hotel to ask mom to join us. Bad news. She had fallen really sick by this time. We bid adieu to the cab guys, paid them 1.5K and called it a day.

The hotel had its own restaurant. And it was a stupid one. Food was costly and they didn’t have any variety at all. And believe me when I say that after taking the order for mixed vegetable from us, they actually went ahead and plucked some vegetables from their own garden-cum-farm and cooked it and served! You can’t get things fresher! But the food still sucked. 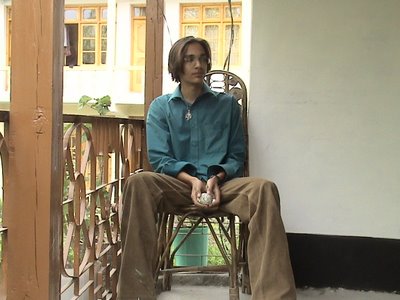 Bro enjoying the evening in the hotel balcony 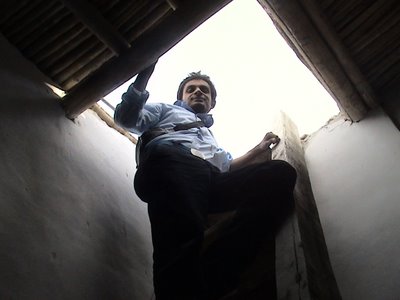 Yours truly, headed for heights. This opening in this hotel led you to the terrace which was made up of clay!

We had to return Leh the next day. We decided to hire a taxi early in the morning, go and see the camel safari and catch the bus. Things didn’t go as planned. We did hire a taxi. But as we were on our way to the site, we crossed the bus for Leh. So we cancelled the idea of missing this bus for the sake of seeing some camels! Money was the reason behind this. Buses here run on alternate days. So missing this one meant we HAD to book a taxi for Leh. And it would have cost us around 3k! Forget it!

This was all about the Nubra Valley. Though the bus follwed the exact same route in the return trip, I still enjoyed as much. Once again, brilliant ride. In fact we faced hail storm this time while crossing the high altitude passes.

Once back in Leh, it was extremly important to rent two bikes. We had realized that the best way to tour the region of Ladakh was to travel on motor-bike. With the heaven like scenes doing the show on all the four sides, no other cost-effective strategy to enjoy the area could be worked out.

Finding bikes was not easy. This was a peak season, and many more had already realized what took us four days to figure out; bikes rock. The rental shops were running short of bikes. We wanted to avoid a Bullet because of it poor mileage. But we also did not want anything less than a 150cc Pulsar because we had to climb hills.

After lot of effort, we managed to get one Pulsar and one CBZ. The CBZ didn’t have lights! But that could not stop us from cancelling our scheduled bike trip for the last day in Ladakh. We brought the bikes to our hotel in Leh and parked it outside the gate. We slept early that night so as to leave Leh as early as possible. The plan was to travel 185 kilometers upto Pengong Lake and then return back before sunset. Afterall, a bike didn’t have headlight! And morever, the flight back to Delhi was the next day. So there was no option of extending the bike trip. 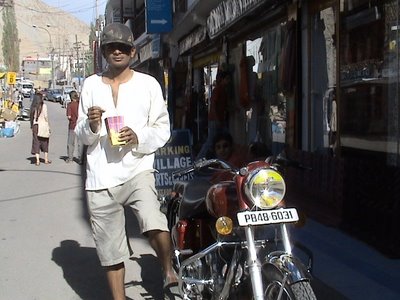 Back to Leh, in search of a bike.

Wait for the bike trip that happened on day 5. It was my most amazing experience in Ladakh. You will love to read about it.

nice post da.
you’ve motivated me to put a visit to ladakh during saarang time!

its so same, i dont feel like writing, as u have described all, so i will definetly copy.