You will find this journey interesting. I plan to take you to a small ride over the evolution of a digital design.

Will come straight to the ride, that I was talking about. I was asked to come up with a design for an EP T-shirt (EP stands for ‘external publicity’, and we have a lot of EP guys, of course all of them students, who go to various colleges in India in the three months long summer vaccation, and distribute these T-shirts for free). So the better the Tee looks, better is our publicity. If you are wondering, from where do we get all the money in this world to distribute free Tee’s, I should tell you that we have a separate sponsorship department too and their sole job is that of getting sponsors for each and every acitvity that goes around, for Shaastra. When I said, its huge, I meant it!

Ah, why does this have to happen each time? I start with my design story and for some reason or the other I get into how organized an event Shaastra is. But it sure is organized and this is the reason, we are the only guys till now to have an ISO certification for a technical festival. Yeah, so let me talk about the Tee now. I have some Design coordinators (five of them to be precise) who are supposed to work for me. But only two of them were in town when this work came my way (the rest had gone to home; vaccation time!). I asked these two guys of to work on it.

You can click on the images to have an enlarged view.

This flow chart design was a creative thing, sent by one extremely creative coord. But it had too much of text, was too long and I didn’t find it visually too appealing. Something better than this could definitely be worked out. This guy who did this flowchart, sent one more design too. Yet again, I found it visually unappealing. 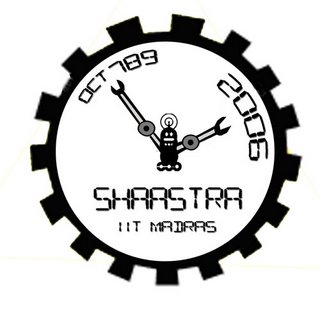 The other coord (yeah we don’t call them _coordinators_ for God’s sake) came up with the following three: 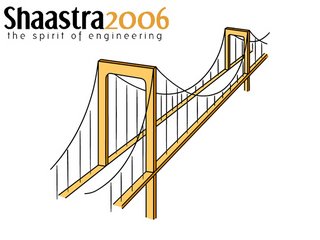 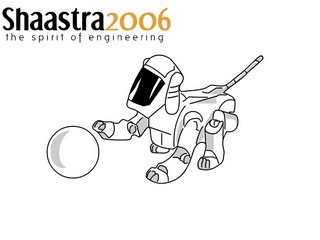 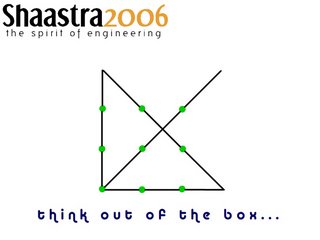 Out of these three, only the ‘out of box’ had some funda to it. You don’t get that? Well, the image is of a solved puzzle. What puzzle? The question is to join all points using just four straight lines in a single stroke. You get that now?

The other two were neat and good looking but ordianary! But then even though the out_of_the_box (OB) one had a funda, it was still kind of too plane and simple. So I asked this guy who had sent these three designs, to try to modify the OB one and make it look more appealing.

Many days passed, but no furthur progress on the Tee design looked like happening. I had time with me, but only till a sponsor for the Tee was finalized. We cannot fianlize an EP Tshirt design till we put the sponsors logos and till the sponsors apporove it! But I knew that the guy heading the spons department, was sooner than later, going to declare that he had found a sponsor. And that finally did happen!

The design was not yet ready. In the mean time I had also mailed the out of the box design to another coord who was in home. She had agreed to work on it from home itself, but she never mailed anything for two weeks.

One day, I finally thought to finish it myself. So I took this OB design, and made this stuff and mailed it the core mail group. Yeah, we the head of various department in Shaastra call ourselves cores and we do have a mail group where we discuss each and everthing that needs to be. And to be technically correct, I am the Desing-Core for Shaastra’06. Here is the design. 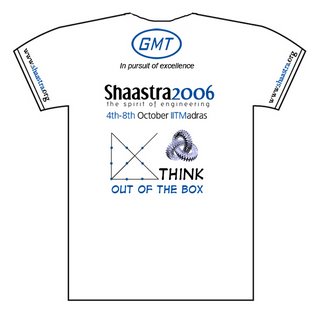 But the general response was that, something better could definitly be done. And many of them pointed at the extra big size of the sponsors logo! I knew that of course! But my intern had already started, and I didn’t have the time to work on it myself. I wanted ideas at least to begin with! So I made call to the group asking all of them for ideas. In the mean time, the coord from home did mail the following stuff but it was still not good enough. 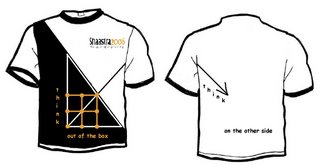 The mailing group came with lot of ideas, and two of them need a mention here.

The first one was to use the mobius stip funda. But no one, including me could figure out how exactly to use that!

The other one was really brilliant and I am sure, some day or another, someone is definitely going to use it. It came from non other than the spons-core himself, who suggested I use the alogrithm to generate a buddhabrot on the front side of the tee and the image of the buddhabrot itself on the backside. And he also suggested some nice slogans. One of them went like this: ‘Be religious‘ on the front and ‘in your own way‘ on the back! Yeah this one was surely a rocking thing. The best thing till now. This is the Buddhabrot image: 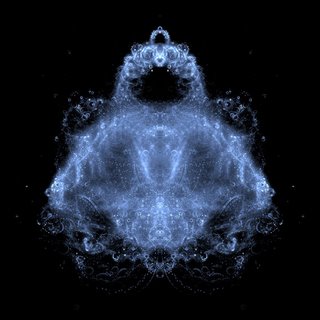 But then like everything else it had a problem too! This image that we needed to print was not a simple one. On posters it would have come great, but no, not that great on a Tee till one made it real costly by going for high resolution prints! You must have noticed that all the other designs used minimum and flat colors. I had especially instructed my coords to do so.

So here, this great idea was wasted!

I had asked the guy who had made the flowchart to work on some other idea as well. And it was pure coincidence, that he too came up with nothing else but a buddha idea! He mailed me this image that he had created, the same day that we were discussing the buddhabrot thing. 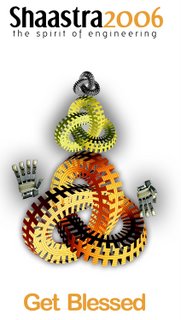 This guy sure was creative. He had used the Shaastra logo to build this Buddha looking thing. Cool! But somehow I felt that it again wont look good when printed on a Tee. And somehow, this thing looked more like Ganesha than Buddha! And wait a second, I said to myself, what’s wrong with Ganesha afterall? And I thought more. Why is it necessary to use the Shaastra logo for making something which looks like a God? Why can’t I use some stuffs which are kind of technical like gears and all but yet, when put together, look like Ganesha. Yeah, why not?

Thoughts had started flowing; I had got an idea to begin with. I Googled and tried to figure out the most basic symbols that make Ganesha look like ‘Ganesha’. I already knew that the ears, the trunk, and the tummy would do the job, but I Googled anyways. And this image caught my attention. 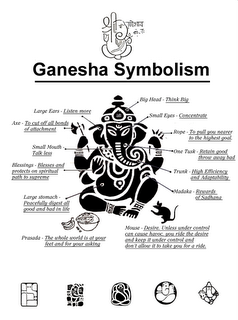 It would be great if I could work out something like that. I started working on it and finally came up with this thing within two hours (it was later made into a better resolution by one of my coords). I call it “Technesha”! 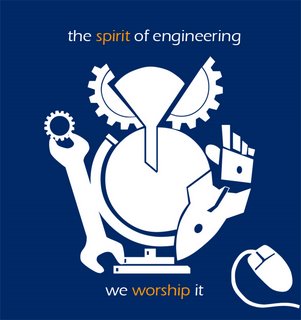 Hope you like it. The solution to the Tee design was finally realized. I will post the completed design once the sponsors have approved it. Don’t want to spoil the fun by posting something which can be changed later. And hope that you had a nice time journeying with me through the evolution of this Tee! So the next time, you see some guy wearing this in your college, I hope you will realize the effort that was put in coming up with the final output. And hey, of course things can always be made better, but then you never have all the time in this world for anything. 🙂

Wow … Nice designs out there…
Can’t wait to get one!
(PS: I am one of the webops coords)

sorry dude but i beg to differ. the tee design is nice but dont you think you could’ve done better by being religiously neutral? Instead of showing a Ganpati, which a lot of people love, you could’ve shown something else? In a multi-ethnic society this tee wouldn’t appeal to many.

Thanks! But I am not sure if the webops guys get the EP Tee. You sure?

You are absolutely right! I did not realize the point that you have raised, while working on this. Buy now I do. Well, to be frank, I have time till Sunday. I will see if I can come up with anything equally good being ‘religiously neutral’ this time.

Any suggestions or ideas by the way? That would be a great help.

I am not sure about the Ganesha ones. But the black and white combo of ‘think out of the box’ is pretty awesome.

hey how about the robot dog popping its head out of a cardboard box? That would be “thinking out of the box” – quite literally 😉

@Dhruv: You really have been thinking! 🙂 And thanks for doing that. Though its kinda late to implement them for this Tee, I will try to use these ideas in other coming designs.

And keep thinking, and suggesting! Dog-bot popping his head out of a box, sounds good. Will ask a coord soon, to give it a shot.

Yeah, the black and white one is looking good here, but believe me when I say that the execution is difficult, and I am alomst sure that if sent for printig, it wont come out well. Unless of course, we get a Tee which is already made of two colored clothes: black and white, stitched the way, the design needs.

I had no idea that the design junta worked so hard! Mind Blowing Effort man. Good stuff.

Here’s a comment from a firangi on the other side of the globe: I think the Ganesha design is really cool and I was gonna keep an eye out to see if it’s possible to get a shirt.

Yeah, I know, India is a democracy not a theocracy, but c’mon, Hindus are the vast majority and Ganesh is everywhere, and it is what it is.

Congrats on coming up with the design.

And just to throw in 2 more cents, I have a gag reflex every time I hear the phrase “think outside the box”, I mean, it’s just been beaten to death and reeks of dry management texts from the ’90s, if not the ’80s.

really good designs man!!! the quality of designs in both shaastra and saarang are improving year after year