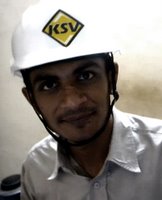 Yeah, I gotta wear this plastic thingy over my head, whenever on site. But of course, here in this pic, I am sitting in hostel room, wearing this helmet just for one reason, and do I even need to tell that, huh?

This very helmet had been lying in a Digital Printing shop in Alvarpet Chennai since two days till I picked it up finally!

Let me go back to Wednesday. ‘A’ (my friendly boss) took me to a site, where some piling work was going on (the two pictures that you see below were taken there itself). We travelled in his car, and as usual, the windows were all closed. So I did not quite remember the route, although got a fair idea of the location. I should tell you that, I (and for that matter most IITians in Chennai) do not travel in Chennai much. The campus serves almost all our needs and there are only few typical places off-campus where we hang around. So even after a little more than three years here, I don’t know about most places in Chennai. Coming back to the site, ‘A’ left in sometime and I continued doing my ‘observation’. I did not have a camera myself, but borrowed it from the Safety guy at the site. So once all the observation and the photo-session was done (I took a lot of pics), and I wanted to return to the office, the Safety guy sent me with some junior staff to a nearby shop where I could get the pics transferred to a comp and then get it burned to a CD. This junior staff helped in finding this shop, yeah the same shop about which I told in the opening paragraph, and as you would have guessed it, I left my helmet there, only to collect it today!

And the funny thing is that, though I planned to go to the site again today to check on the progress there, I didn’t. Why? Because I simply couldn’t locate the place! Then how come I located the shop? Huh! There’s a little detail that I need to share then. Read on…

In the shop, which mainly masterd the art of digital print out, the CD burning rate was too high. Rs. 50 per CD. Mo*********rs. Anyways, to top it, they didn’t even have any CD. So I sent this junior guy to get me one, and when he got it (it cost me 12 bucks), and I got the pics burned to it, I asked the shopman to deduct 12 bucks at least from the enormous fifty that they were charging. But no, ‘it’s 50 just for burning CD’, he insisted. I almost lost my temper. This was too much! I told him, that in any shop where they burn CD’s they give their own CD, the cost of which is always included in the burning charge. But to no use! I said, I wanted to talk to the manager of the shop. ‘He is on leave’, pat came the reply. I paid him the money, but did ask for the manager’s phone number (I had become hyper already). A female staff at the shop, gave me a visiting card, which carried the shop’s phone number and _address_ as well!

Only when I had returned to my room that day, I had realized that amidst the heated discussion, I had left my helmet there itself. I would collect it when I go to site next. I had said to myself. And so today, when I needed to go to the site, I called the guys, confirmed that the helmet was still there, and then found a bus from the office which could take me there. Alwarpet! And thus I was easily able to spot the shop (without even needing to ask someone).

But I lost my way after that. This shop was situated at a crosssing with a flyover running over it. I chose the route exactly opposite to the site, I guess and after walking in the sun for half an hour, I gave up! I called up ‘A’ but he didn’t pick. And then as I was passing a bus stop, I spotted this no: written there: ‘5C’. I immediately recalled that 5C goes to Tharamani, the back-gate of IIT, and so completely lost the enthu to put any more fight for the site. I stopped at the stop and waited for my bus. A 5C came soon. I boarded it.

‘Tharamani’, I declared as I forwarded a ten rupee note to the conductor. He blabbered something in a Tamil+English mixup but the meaning was still very clear. I had boarded the bus coming _from_ Tharamani. Oh boy! Now I understand, why was I unable to locate the site!

Well anyways, I left this bus at the next stop, changed side on the road, and soon found, and got into the correct 5C, with the helmet of course!

Hey, tomorrow is a Saturday, but it’s a working day for me! Sad na? The good thing is that it’s just a half day! 🙂

your intern seems to be quite a rollicking ride for you!

🙂 I think I make things interesting enough when I start typing them!

not interesting but its painful..

I can understand your feelings of pain here! Take the better route, better restrain your readings to my blogs, coz here in this space, this crap is all that I am going to present. And definitely its not for everyone!