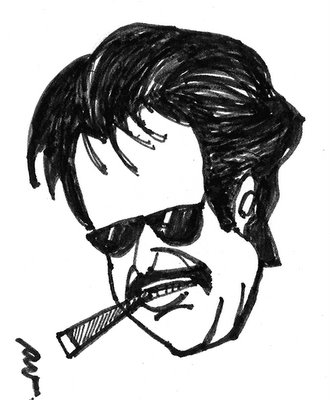 There are somethings which I could never have known, had I not been in Chennai. The power that Rajni commands among his fans, is one of them.

It was during the last semester, that his latest Tamil block-buster Chandramukhi was shown in the OAT(open air theater in IIT Madras). I do not understand Tamil but I did go to watch the movie.

Rajni had the grandest of the grand, entry in the movie; one of those typical filmi entries where the hero is shown more powerful than Superman, smarter than James Bond and more unbelievable than Neo. It was the first time that I saw people screaming with passion and hysteria for Rajni. I had always known that he was worshiped like God in South, but to actually see the God getting such a passionate ovation from his admirers was a rare experience.

Looking forward to Rajni’s latest flick Sivaji, though it will take some time before this movie is finished.

Hope you liked his caricature that I made.

Hey,
You are a really good cartoonist!
Liked all ur sketches.

Thanks Helmet and thanks Paresh!

tank god in our college they dont show regional films, only english or hindi.

but a bad news is that they are going to charge rs5 for every movie, even if we dont watch it..