Saif Ali Khan reportedly knocked off a thirteen year old kid yesterday in Mumbai while driving [Read details]. But hey, notice this. This guy did not run away from the spot (as most of them do) without even a salaam-namaste. Instead, he got out from his Lexus, took the injured kid to a nearby hospital, called his relatives and then went to the nearest Police Station himself to register a case for an accident and then of course got arrested and later released on bail. He even tested negative for alcohol! Wow! (I guess however that in case he had been high on alcohol, he would never have done at the first place, whatever he did after the accident. 😉 )

P.S: Here’s a caricature of this actor that I had made some time back: 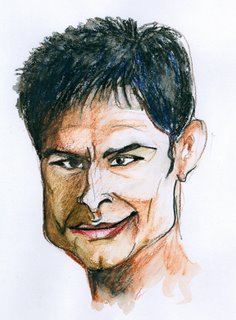 Wasn’t a Lexus, as far as I know. SUV – more on the lines of Land Rover/Pajero or something.

This website reported Lexus (read the last para of article). But then it could have been anything! Most of the other sites have reported it was a Toyota Landcruiser.

I assume that the ‘cool’ was for the caricature. Thank you so much!

You have great poems in you blog…keep it up!

it ws for both – the comic and what saif did.

If someone would ask me to rate this actor, I would like to give him 3 on 10 but this whole incidence shows he is not that bad as I thought.
GOOD JOB SAIF!!!
I never have tried my hand on caricatures,though

Why dont you give it some photoshop effects?

Thank you all, Sneha, Vikram and Ghosh!

I read over your blog, and i found it inquisitive, you may find My Blog interesting. My blog is just about my day to day life, as a park ranger. So please Click Here To Read My Blog