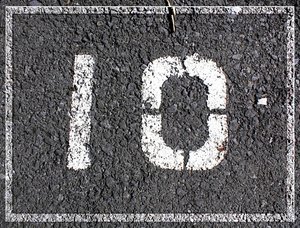 I realized that I was always short of fancy words whenever I wrote something (ok, I â€˜amâ€™ even today). I could express my ideas perfectly well and without much error, but then the language was just too simple. So I decided to boost my vocab and went ahead and did a stupid thing. I registered for an email-newsletter at Dictionary.Com which would mail me a new â€˜fancyâ€™ word daily.

To do hell with these guys, they sent the most insane of words to me. Now when does someone use a term like â€˜bivouacâ€™ for an encampment for the night? Given a choice, I would rather write the whole â€˜encampment for the nightâ€™ thing than bother to remember the strange word which is also kind of difficult to pronounce. Bye-vou-aik? Be-vou-aik? Biv-ou-ek? To do hell with it again. For the curious ones the actual pronunciation is â€œBIV-wakâ€

Today I want to do something. I want to put together the last ten words that I received in one single paragraph (so now you understand what this ‘ten’ was all about). Let me see if I succeed (though I donâ€™t think itâ€™s really that difficult). And to add to some fun, I will start with bivouac itself! Here I goâ€¦

My bivouac was ready. I had eight hours to rest, sleep or whatever else I wished to do. The dark-but-still-rubicund sun was about to set. The crepuscular view of trees all around reminded me of her; she, the ingÃ©nue from my town. Her lambent face was still fresh in my mind. She was that anodyne to me who sucked all the pains that I ever had in life. As soon as my job is over, I shall get back to her, I thought. But then, I did not want to think too much about her. Her thoughts were too distracting. I realized however that something else was distracting as well. My stomach! I didnâ€™t even remember when I had a repast last. It was time to take some food finally. I unpacked the routine-high-on-everything-but-taste-food that I had and as I consumed it, my mind kept rolling for some more time. As I finished eating, it had become completely dark, with no moon to brighten the invisible sky. The combined effect of the food that I just had and the moonless night was simply soporific. The subterfuge next day was not going to be easy and a sound sleep was but anything that I needed. If everything worked as planed, I would soon be away from this maelstrom of shit that I had been put into. I would be back to her, playing with her locks. She was the last thing I remembered before crashing inside my bivouac. As soon as my job is over, I shall get back to her.

Hurray, I did it! Anyone has the enthu to find out those TEN words? Hey common you already know one, donâ€™t you?

14 replies on “And then they were ten”

I came across your blog by chance and laughed at your humor. Nicely done, though I am not sure you used all the fancy words exactly right. But so what? It is a funny post.

By the way, my outfit “biv whacked” when on maneuvers all over Germany.

Good you found this funny. By the way this was the fastest comment that I ever recieved. You have to believe me I posted this thing merely five minute back and here I found someone leaving a comment.

Well, yeah may be I might have messed up some of the words. But as you said, so what? It is a funny post!

Let me tell you those 10 words
(I had to refer to the dictionary for these 7 words)
bivouac, crepuscular, ingÃ©nue, lambent, repast, soporific, maelstrom.
And I knew these three words…ye ye…
rubicund, subterfuge, anodyne.
So, I guess these are your 10 words….i m rite…rite???
On a whole, funny post Amrit!!!

And yes a big yaeeeeeee… from me too for your knowledge of 30% of the fancy words that I used. (I knew only about subterfuge btw).

So you from Indore… well nice city! (never been there though!)

And thanks for saying it was funny! And also for taking the pain to find those 10 words.

Oh! Ok. The sitemeter on my page said that a user from Indore, India was accessing my page at that time, and then I saw your comment. I guessed thereon.

Well Bhopal is a good city as well 🙂 (never been there though!)

Honestly, I was just familiar with “subterfuge” and “maelstrom”. But your wordy post has enriched my vocabulary with 8 new words. As a matter of fact, the process of digging out meanings of new words is indeed a soporific activity. [Yaaawn]

Every evening when I open my mailbox, the first thing I look for is this new word from dictionary.com. Well, if you wanna write the GRE, that’s the only way to get thru the verbals, trust me. And learning uncommon words and using them on people can be fun, especially when they catch people offguard. You can check a few more funny ones in this particular post of mine. http://sunshinenjoy.blogspot.com/2005/08/grefication.html

Well, why I registered with the guys-with-dictionary was to get better at my blogging skills. Though I doubt now, if that’s really going to happen.

And yes, you are right. Anything for GRE!

The ten little compy words,enough to boggle a simple mind to become a “Charles Dickens”. Relax, In India… mostly people with good english lands up in IIMs. All the best with your vocabs!! and If you get any time .. plz be our only “Charles Dickens”.That will be enough reason to offer you a Fling Vodka with an Russian Caviar.lol

P.S: btw thanx for your words on my blog’s comment section.

Not so soporific, if you word web(http://wordweb.info/free/)installed on your pc.