IIT Madras celebrates Shaastra. It is our technical festival. We celebrate the spirit of engineering. So it was essential for us to figure out what exactly did the ‘spirit of engineering’ stood for. We did figure that out but instead of me stating that for you, let me take you through the process by asking you certain questions.

What does engineering mean to you? I asked this to many and almost everyone gave a similar reply: engineering is about applying science. It is about taking ahead the theories of science and implementing them. This is what engineers do.

Now, what is science all about? It’s about logical creative thinking of explaining nature and various other kinds of phenomena. Years of experiments, hits and trials, and out of the box thinking, led to various theories of science. Which now lay as a resource for all the engineers to use. In engineering, you still have to think out of the box, but unlike science you cannot afford to go for hits and trials. In engineering, you don’t take chances.

Albert Einstein once said: ‘God doesn’t play dice‘. We, the engineers, try to live up to it. We think out of the die. We celebrate the spirit of engineering. Ladies, and gentlemen. Let me present to you all, the Shaastra logo:

Do notice how the two dice are mirror images of each other, and yet flawed one on that. Why is there a flaw in spite of so much of symmetry? We try to remove all uncertainty, induce perfect symmetry and strive for perfection. And yet we can only strive for it. Perfection. Like God, we don’t play dice. Unlike Him, we are never perfect.

Shaastra Logo is finally taking shape and the funny thing is that it is none from the list of logos that I threw in here. Thanks for all the comments anyway.

Once the logo is really really final, I would write the story behind it. By the way yesterday I realized that it indeed was a good thing that the spanner-making-an-S logo was not liked by many. I realized it when Sofie messaged to tell me that she had noticed that the Suzuki Service center had a very similar logo with two spanners making an S. Ouch! What a disaster it would have been, had that one gone ahead as the logo!

Tomorrow I shall write my last exam in IIT. On text, it appears very appealing but frankly my dear, there’s nothing very exciting about it. On an unrelated note, life sure has become exciting recently. A quick toast to life. Gulp!

If you have an opinion, please share it with me. All you have to do is to let me know which are the two best logos from amongst the ones shown below, and if possible, you reason for picking them over others. Go ahead, leave comments.

Note, that in all the logos below, if you spot an S, it stands for Shaastra and the ‘spirit’ of engineering. 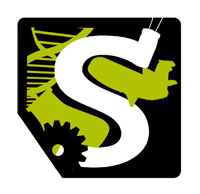 Update 9: (12:43 PM, 24 April 2008) Added one more variation of –D (refer update 8). Also, presenting below a simplistic version of the combined spirit of various branches of engineering (–E), which together look like S. The red colored propeller can also be taken for red spirit. I have removed the DNA because a beaker at some level represents BioTechnology as well. 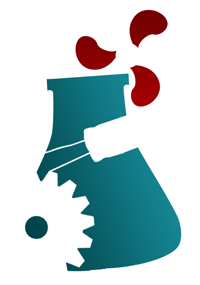 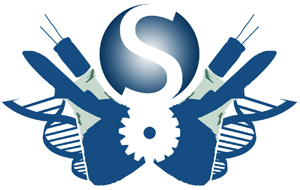 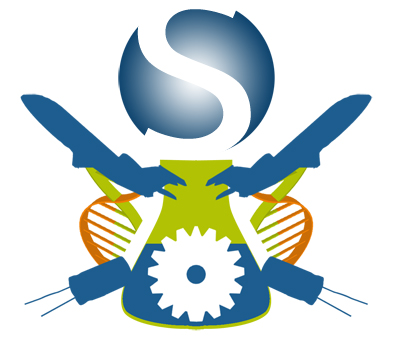 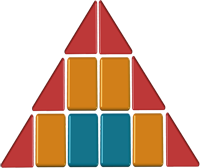 Update 4 (11:30 AM, 23 April 2008): Adding a look-alike of the original logo (–A) because there seems to be no consensus on the new ones proposed. This one is inspired from the escher knot, the original logo, and yet it is different enough to be registered as a new logo. It represents everything that J represents (symmetry, convergence etc.) but the best thing about this would be that, branding wise, everyone should find it easier to associate it to Shaastra.

UPDATE 2 (10:20 PM, 22 April 2008): Why is the logo being changed? Ans: We do not have copyright over the one we had been using so far (remember Shaastra started as an amateur event?). Now that Shaastra has become truly professional, we cannot afford, either ethically or by law to continue using a logo for which we don’t have further rights.

Here is the list of logos, browse through them:

A. Three different forces have been shown to create S. The forces could be engineering, science, and passion.

B. Spot the red S in the tilted symbol of infinity. It also represents an endless loop.

D(i), D(ii), D(iii): Any engineering involves building solutions, block by block. Also, all three are supposed to resemble the shape of letter S.

E (i, ii, iii): Two spanners meet together to create the S.

F. It’s a cube with wings of desire. The overall look is supposed to depict loads of passion.

I. This is again an S. The upper black sphere contains inside it red and white spheres, which represent various streams and ideas of engineering. These small spheres roll down the red tube, get refined and enter back the black sphere from the other end. 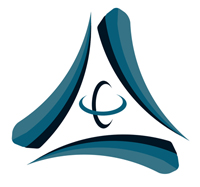 J (i, ii, iii): Symbol of symmetry, creation, convergence of ideas. (iii) also has two spanners creating an S in the center while (ii) has two rings in the center.

K (i, ii, iii): All of them show a spanner and an arrow, trying to tell that engineering gives direction to our lives.

M. It’s a heart that loves engineering (notice the eagle’s view of a pyramid)

That’s it. Please go ahead and let me know which is your top two, and if you can, also tell why. Thanks in advance!

PS: I have made only some of the above logos. 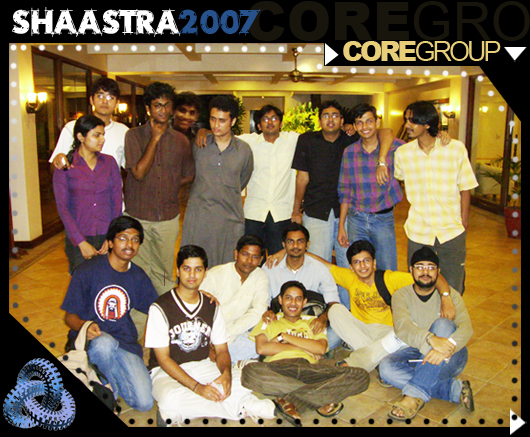 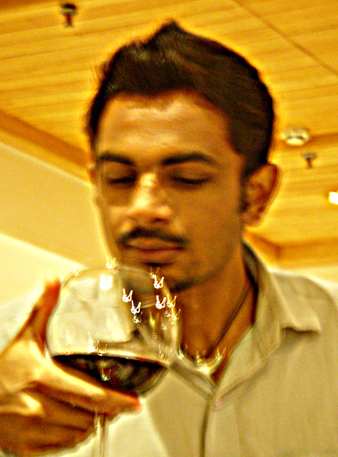 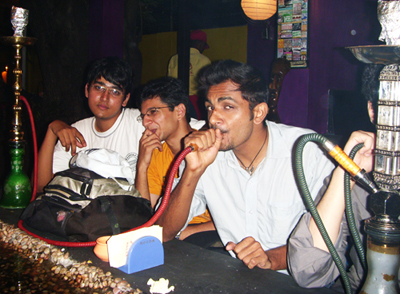 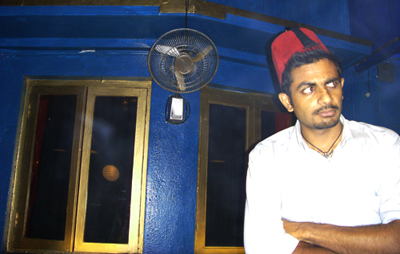 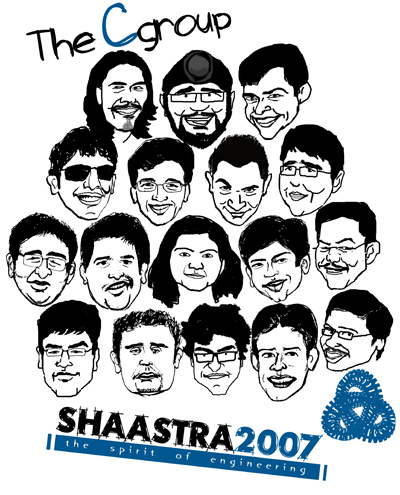 Lesson learnt: never ever promise a group of seventeen people that you will make a caricature for each one of them. Getting this job done was almost like working on my DDP. I enjoyed initially and then got bored but kept working and working till finally things started getting interesting. Hope to get this thing printed on tshirt soon.

All the best to those who would make it to the new core group (whenever it is formed).

By the way, I request anyone who has ever been a part of Shaastra to give me an idea or a design for a new logo. Yes, that’s the one last thing that I need to get done. Shoot off.

[Update: Thank you everyone, who went with the guy who deserved it more, irrespective of anything else. This is the time to feel proud of what you did.]

The bad thing about politics is that you don’t have to be genuinely good to win elections. You just have to play your political moves right. Being genuinely good helps only when the group of people who are going to vote for you (or against you, as the case may be) is so small that all of them know you personally. In such a case, logic takes over politics. When the group is so large that it is impossible for the voters to personally know the candidates contesting the election, politics works, rumors work, regionalism works, and to sum it up, all kind of shit works. This is one of the reasons, I never ever contested for any post in the institute. There always has been enough shit in life already,to take care of; who needs more? 🙂

I am writing this post today to ask you, who is reading it right now, a fairly simple question: How would you feel if you see baseless and false rumors going against someone who is genuinely good, and clearly more eligible for a job?

I will tell you how I feel. I feel like a helpless asshole because I do not know what steps to take to put down such baseless rumors! Can none of you reason out the source of such rumors? Can’t you open up your eyes and see that the very reason someone needs a rumor against an opposing contestant is that he knows he doesn’t have that genuineness to help him, that he knows he is not half as good as the other guy?

Yes, I am referring to insti politics. Elections are scheduled for tomorrow. There are so many posts that my poor memory fails to recollect the exact number. But there is one particular post that I am extremely concerned about. I am concerned because that single post has to do so much with how Shaastra, the technical festival of IIT Madras, of which most of the students are so proud of, is going to take shape in the Golden Jubilee year of the institute. On one hand I see a guy who is perfect for the job but who sucks at playing politics. On the other hand, I see a guy whose most important forte is not his set of credentials (neither his ideas about how to facelift Shaastra), but his ability to play politics.

Is this what Shaastra needs? A better politician? If you ask me, I would say, no. And if you have ever been a part of Shaastra, you should agree with me. There is nothing more I have to write about here in this post. Actually, this probably is the first time I am writing on insti-elections (and of course this is going to be the last time). Never before, did I feel the need to campaign for anyone. This one time, I want to. I want to, because I feel sad at the very thought of seeing Shaastra slip away from able hands; from the hand of someone who has seen Shaastra inside out and has the intelligence to change things. I want to, so that if genuineness does prevail over politics (we will get to know about that tomorrow), when I pass out, I can feel proud that I did what I could in the good act. If you, dear reader, believe in what I say, you know it already what to do tomorrow, when you go to vote. And if you can do anything more to make sure, fairness prevails over anything else, do that. Do that, so that like me, tomorrow you can feel proud of what you did, irrespective of what the outcome is.

[Update 2: On second thoughts, I shouldn’t have concluded about a contestant being a good politician based on some anti-campaigning rumors. Spreading rumors is a bad thing to do. But then, that could have been the work of some of his supporters. So, I apologize, if my opinion on him, hurt him.]

[Update 3: It’s time we stop discussing this post. There is work to do. I am closing off comments.] 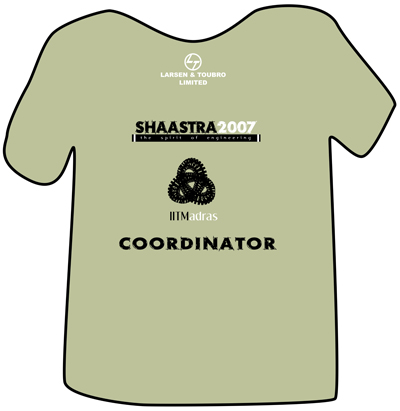 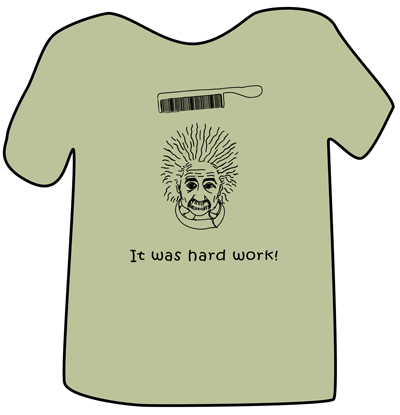 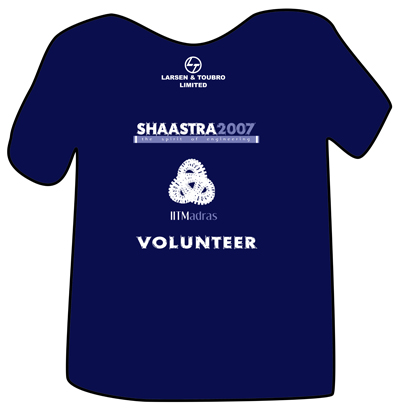 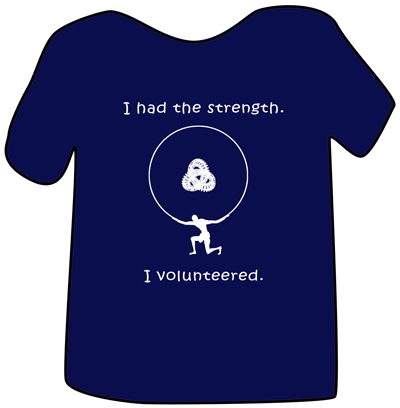 Some of you might remember seeing few revolving robots in white background on the Shaastra 2007 website earlier this summer. I won’t comment on how good or how bad they looked but the message was perfect. They clearly established what kind of a festival Shaastra was. When you have a robot folding its hands and welcoming you, you know it’s a technical event.

The look apparently didn’t appeal to many and I decided to do away with it by having a simpler conventional theme. The robots were forgotten.

Today, as I read this news, I was reminded of them. Somethings just get back to you and make you remember old days. Life is fun. 🙂 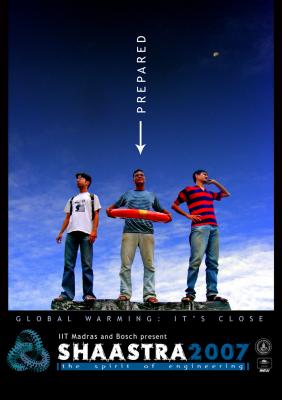 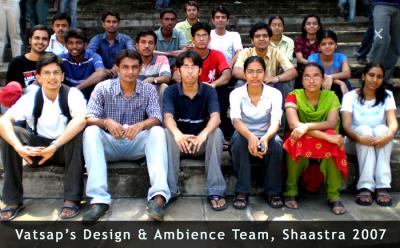