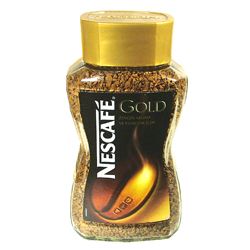 Note: Since I have my coffee only black, this review is only about black coffee made with Nescafe Gold.

Alright first things first. It is friggin costly. While the widely available Nescafe Classic comes at Rs. 130 for 100 grams, a 100 grams jar of Nescafe Gold costs a mind blowing 350 bucks.

Is the taste better?

I really cannot answer that. All I can say is that, it tastes and smells totally different from Classic, more on the lines of filter coffee decoction. The taste is very distinct and the coffee that you get using this instant coffee powder is somewhat thicker than what you get using Classic.

This stuff even looks different, from outside the jar (as you can see in the picture). The powder is not really powdery but consists of big brown grains (though very soft and crushable).

I need some time to get used to this new aroma and taste. My only concern is getting too used to Gold because if that happens then I might not be able to enjoy my budget coffee (Classic) anymore and would have to keep spending fortunes on drinking this royal stuff. Alright, let’s just make one more mug. 🙂

Update 1(on June 24th 2008): Only 1/10th or probably 1.5/10th of coffee remains till date. And no, I didn’t quite like the taste. Of course, this is a very personal opinion and there is no way I can conclude anything. You try it out. Who knows you might like it. So yea, once this stuff is over, I will go back to my classic till I spot something new to try again.

I am back to my black coffee mode since a couple of days. My black coffee just got a little stronger. And finally I have one person around who likes it as much as I do. There are only two other people besides her who match my taste for self-made sugar less black coffee. One is my darling bro in Goa, and the other is my cousin in Bangalore who gave me an awesome company all the while I was in Bangalore for my internship.

If you are someone who is fed up of tea and have had enough of the regular Indian coffee (read: the one with milk and sugar), I encourage you to give black coffee a shot. I won’t say, you will like it in one go, but once you have developed the taste, you will die to have it.

Easy steps to make your own black coffee:

The reason I insist on another spoon to do the mixing act is that, it makes sure the spoon in contact with coffee powder is never moist. Moisture shortens the life of the coffee. What’s coffeeing? Well, when the world boozes, it’s called boozing. But what about those who don’t booze and still wanna get drunk? They indulge in coffeeing! And oh boy, I went coffeeing today like mad. Like crazy.

I am on top of the world today. 🙂 I am a lucky person. Today is such a special day in my life!

Encouraged by Lakshmi’s comment on this post, I was tempted to try tea for a change. Hot lemon tea with honey.

I somehow knew that a shop which has ‘cafe’ and ‘coffee’ as its first two words cannot possibly serve as great a cup of tea as a mug of coffee. Once the hot lemon tea with honey had arrived, and I had taken the first sip, I petty much knew that I was indeed correct. It was very ordinary, nothing that can’t be made yourself with a mug-heater, a lemon, some honey and fresh water. Or may be, I am such a coffee freak that anything that doesn’t have coffee in it, doesn’t really excite me. Anything but Granita! Granita is the best cool drink I have had and the credit goes to the crushed ice pebbles than anything else.

And well, about that shopping stuff: A CCD coffee powder named Black Forest, kept on display had been catching my attention since a couple of days. The only powder that I have used to prepare coffee myself has been Nescafe Classic. So I was happy to find some new stuff. I took the black, attractive coffee box in my hands, adored it for some time but then gently placed it back on the shelf. Somehow, I was still not sure if I really wanted to own it.

As I was about to finish my HLT with honey, one of the cafe-boys came up to me and inquired.

I didn’t know what a blunder that ‘yes’ was going to be. I also decided to pick a 70 bucks mug from CCD. I had broken the last mug that I possessed in the beginning of this sem. Almost at the same time, my stock of Nescafe had finished. For reasons not too clear, I didn’t replace either of them. Or in other words, black coffee took a back seat. I used to have the normal, milk based 5 bucks Nescafe at the Nescafe outlet (which I still have at least twice daily) or tea at Tiffanys.

But things had changed over some time now. I was back with myself. And I was missing my coffee. Coffee to me is my companion with which I can be in peace. I have to. It gives me energy. With a mug of coffee in my hands, I somehow feel closer to myself; don’t have to feel lonely. Books might be your best friends. For me, it’s my coffee.

Coming back to what happened yesterday: after going for the big ceramic mug, I spotted yet another object of affection. It was a 110 bucks small good looking blue plastic jug with a black cap. I inquired if it could be used for shaking coffee. I should tell you that if you shake coffee, and do that well, before adding hot water to it, it tastes better than directly mixing the powder. But then, good shaking should ideally be done in hot water. So you need a mixer which can withstand hot water. When I used glass bottles to shake the stuff, it would crack in two or three uses. The plastic bottles that I had were never strong enough to resist from deforming if you poured hot water in them. So this jug, looked interesting and I took it.

Shopping was done. I was in my room; anxious to taste this new flavour: Dark Forest!

I opened the box. A black plastic packet was lying inside. I took it out, and broke the seal. The water in the mug with a mug-heater placed in it had started boiling in the meantime. I transfered some water from the mug to the blue jug with the black cap. I then, transferred two spoonfuls coffee powder from the packet to the jug. The coffee powder looked creepy. It was too fine and too sticky. Was this really coffee? I wondered.

No sugar. No milk. That’s the mantra. Once the coffee powder had met the hot water, the cap of the jug was closed and the shaking process initiated. Hey bhagwan! As I shook the jug to mix the coffee, I realized that water would come out from the cap, leaking beneath the plastic slider provided in the cap. This was just-another-jug and not a coffee-mixer. 110 bucks!

The better discovery was yet to be revealed. Once, I ‘some-how’ manged to get the mixing done (basically by reducing the frequency of my vibration, to avoid spilling), it was time to open the cap and taste eternity. I opened the cap. Hey Bhagwan! The coffee powder, was floating inside the jug! It had refused to mix!

This was not an instant coffee and jusssht would not mix with water! Filter Coffee! Oh my God! 125 bucks! Why didn’t it strike to me earlier?

I could not throw it away. That would be sin. My love for coffee gave me enough power to consume filter coffee made without using any filter. Gravity helped me by forcing the non-dissolved particles to settle down at the bottom of the mug. It tasted so dilute and so un-cofee-like. And I finished it to the last sip. I am a freak.

Well the only thing that didn’t shock me was the coffe mug. I am left now with roughly 90 grams of filter coffee powder (or may be more), without any equipment to make filter coffee; a jug which spills the liquid if you try to shake it; and a mug which I cannot use for driking water of course. Poor me 🙁

OK. Yet another post on yet another CCD-offered-coffee. I am surely a coffee nuts.

Grande Mug costs you 26 bucks but it tastes much better than the 20 bucks Caffeine Kick. It is strong enough and yet easy on the taste buds. It surely is good stuff for its cost especially if you are in need for some good black coffee but don’t want to go high up for the international drinks which cost close to half a hundred rupees.

Update (June 15 2008): It isn’t black coffee. I don’t know why I wrote that. It is nothing but cafe latte. Also, now it is no more called by this name (Grande Mug) but is referred to as Grande Latte in the CCD menu. It is nothing but the regular latte in larger quantity and comes for 31 bucks inside IIT. This one is my regular CCD drink because for black coffee I prefer drinking what I make myself.

Had it yesterday in CCD. It’s toooo much of coffee mixed in hot water. It’s crude. It tastes almost like the black coffee that I make for myself in room sometimes by directly adding two heaped spoons of Nescafe Classic to hot water. The only difference is that Caffeince kick appears to have almost double the coffee quantity that I use, in the same volume of water.

Have it only if you are in the mood to have some real HARD coffee, and don’t really care how HARD it is. Whatever that means!

I guess this is what the coffee that I had minutes ago was called. It cost me 46 bucks, or in other words it was costly. But it was a tasty black coffee. Earlier I had this another 46 bucks hot drink called Ethiopian Kahwa and both of them taste exactly same, or so I believe.

What is a tasty black coffee? It’s thick, and strong and yet it is not too hard on tongue (like espresso shorts). The final verdict is: if anyone offers me to treat in CCD, without putting a cost constraint, my best choice for a drink would be one of these two coffee servings.

I had Irish Coffee in CCD today. I would say it was rather tasty given that it was a milk-less black coffee. I would recommend this drink to those who are not used to strong black coffee or espresso, but want to try a drink that doesn’t have milk to spoil the fun.

Don’t add the extra sugar that’s provided to the Irish Coffee. It will taste sweet enough because of the delicious white cream that they add on top of the otherwise mild black coffee. In fact, the first few sips till all the cream is finally over, is the best part. It prepares you to taste the relatively plain black coffee that remains.

In IIT, it costs 32 bucks but given that you get some really great cream topping, its kinda not too much to ask for.

For the ones, who don’t really like coffee weak, stick to the 16 bucks pure espresso! 🙂 But in case you haven’t yet tried the Irish, give it a shot at least once. You will like it for sure.