I love the guys at Google. They keep coming out with one new thing or another and most of the stuffs that they come up with are pretty good. In fact some of them are just amazing, like say Google Earth!

As I logged in to my gmail account today, I noticed this thing called “Google Calendar“. Hope it proves useful like most of Google’s services (especially gmail).

Check out this link! It’s cool…

By the way, here’s one more Shaastra2006 design for those waiting some new stuff (anyone?)

This was supposed to be the Sponsorship Brochure Cover page but I’will be using something else for the cover page now.

“If you really have the courage, go to your parents and tell them that you don’t want to do Civil Engineering in IIT, and then leave this place and do what you are interested in doing…”

This guy had repeated the same thing what one of my great friend keeps on telling. All of them are correct. I don’t have the courage to do so. More so, because I do not know for sure, how I want to spend the rest of my life. The only thing, I have realized is that I am not passionate about my courses.

“… but if you don’t, then at least do what you can, at least the minimum, to get out of this system gracefully and in the shortest time possible. Otherwise you wont be in a position to do anything.”

Makes so much of sense, doesn’t it? This guy was telling the truth of life; the truth that I was running away from. And then he suddenly made me stop and think over it again.

“You might have reasons for flunking this course, and they might be valid reasons. But think of this: who is the one who got to pay for it finally? It’s not the faculty who could not make you interested in the course, it’s not the system who never cared about you, it’s just you. “So true! It’s fuckin me who is repeating a course, coz some sucking Profs did nothing to make me interested! Just so true. And what the hell! How did I let them do this to me. He had opened my eyes. He had made me realize it was time I take charge of myself.

Walk out of the system gracefully!I wont ever forget that! Thank you sir! 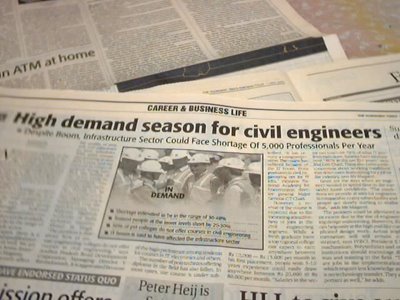 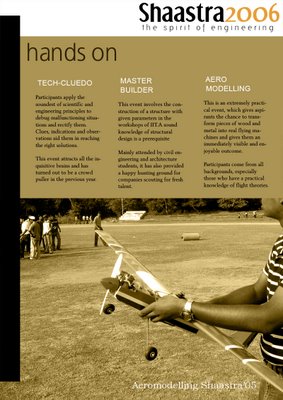 Just finished making this. This is supposed to be a sample page from the yet to be designed Sponsorhip Brochure for Shaatra’06. Notice that the image used in the design is not some gen pic flicked from net. It is actually a pic shot last year in Shaastra’05. Enjoy and keep wating for more stuffs to come.