It was about eleven in the night. Our first day in Uganda was coming to an end. We were walking to our hotel. I saw a broken down car on the other side of the road. The hood was open. A man was standing next to it, apparently waiting for someone. I found it an interesting thing to capture on camera. I bent down to get a good angle. And clicked. But some motorcycle just passed by and filled my frame. I waited to get a clear shot before I could click again. And then suddenly someone grabbed my camera from behind and tried to take it away. Shouting ‘you taking pictures, eh, why you taking pictures’. I realized they were two of them. They pulled me away from the road. Into darkness. 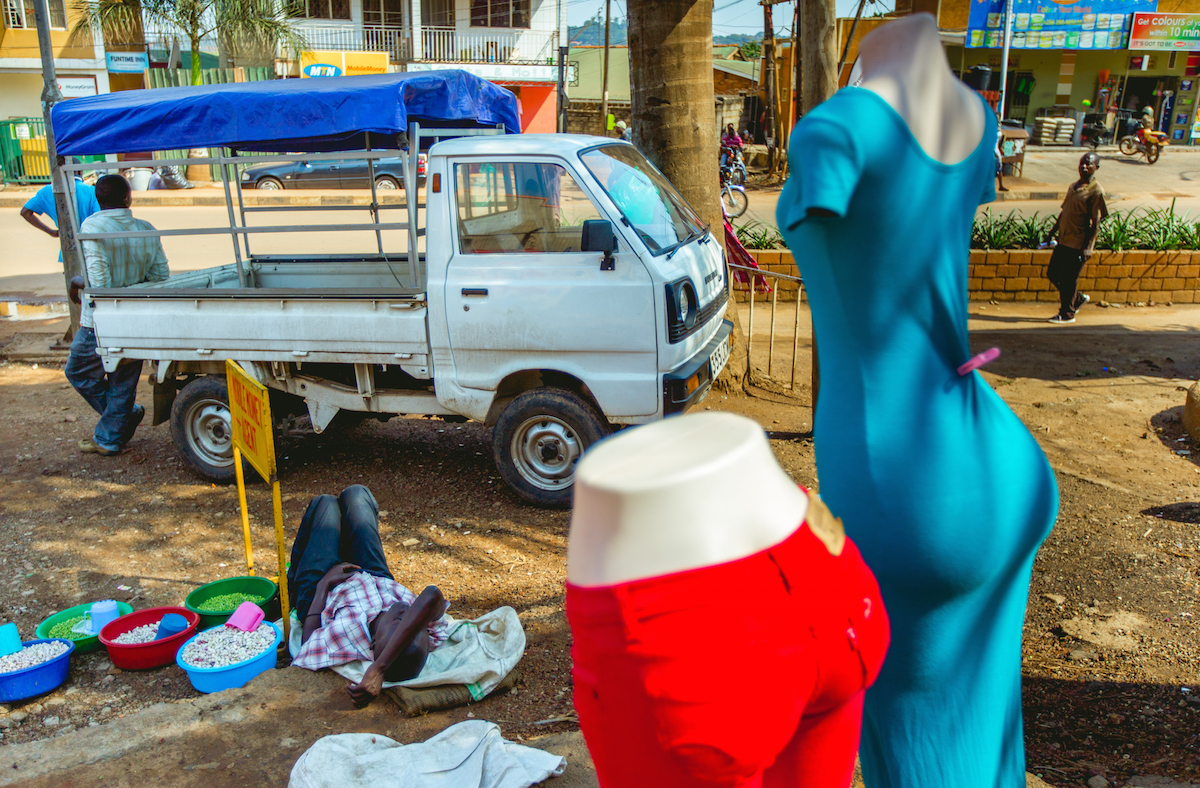 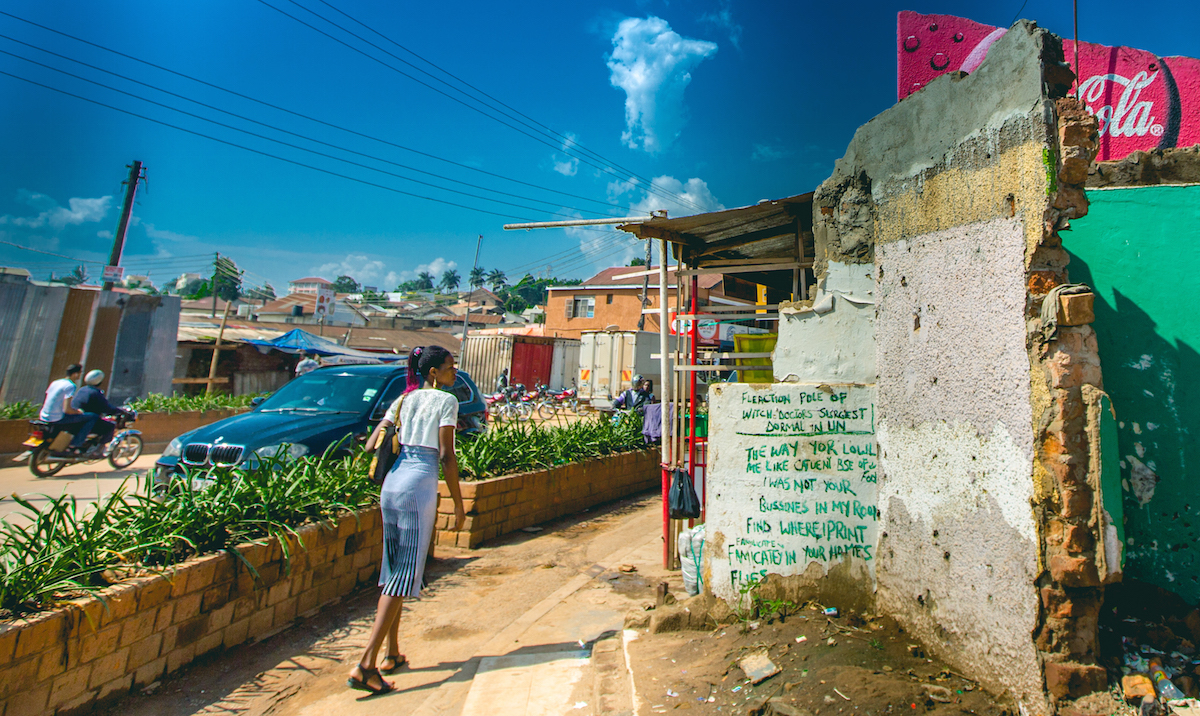 The day – the first day rather – started well. Shanta has a friend in Kampala. His name is Oscar. Oscar is a documentary photographer and his name appears on a recent list by BBC on ‘photographers to watch out for’. Shanta had met Oscar in Ethiopia earlier. They both were there showing their work in a photo festival. Oscar has been focusing on documenting brake-dancing in Uganda presently.

So Oscar came over to our hotel and took us to to an Ethiopian restaurant nearby. And we had some Ethiopian food. It is served on lines of wazwan, in the sense that people share the same plate. And eat without spoons and forks. Oscar told us about an art auction being held the same evening. Shanta and I decided to attend it. For the fun of it, not to bid or anything. A print of one of Oscar’s photograph was up for bid as well. 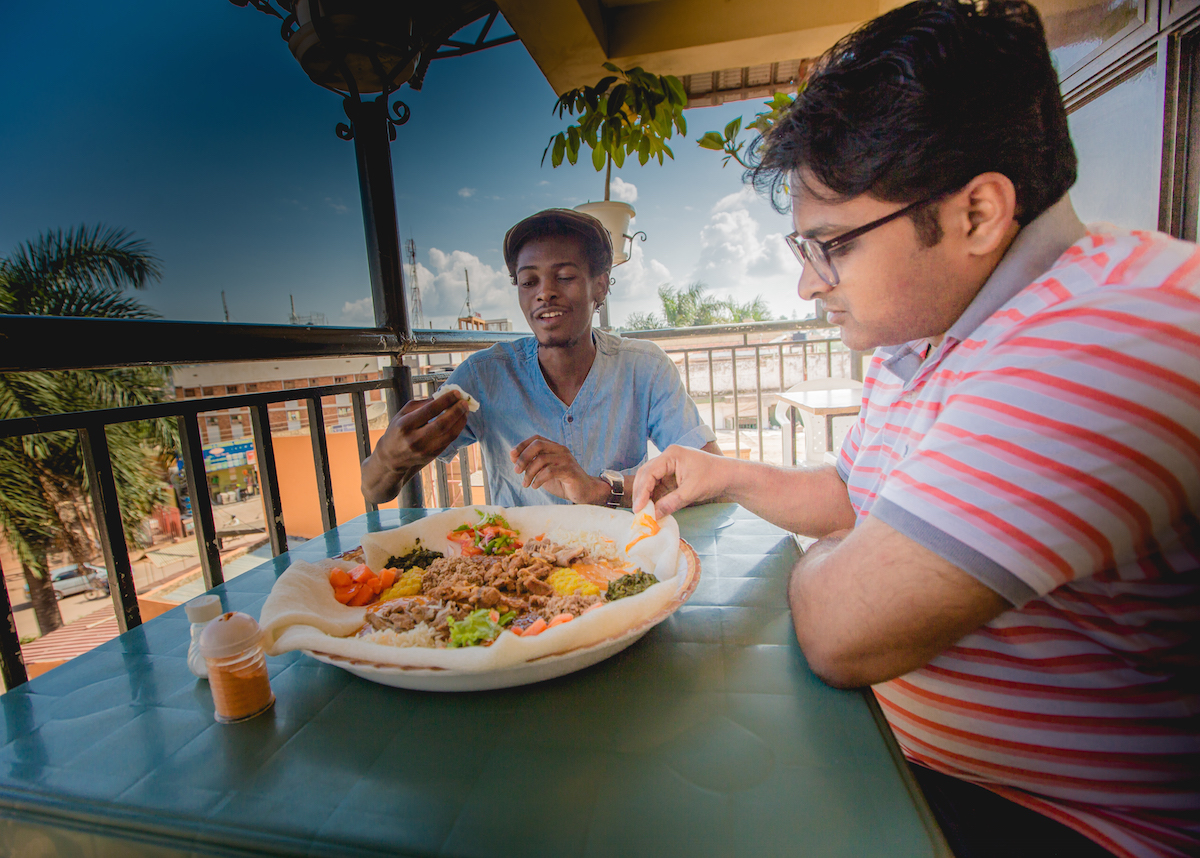 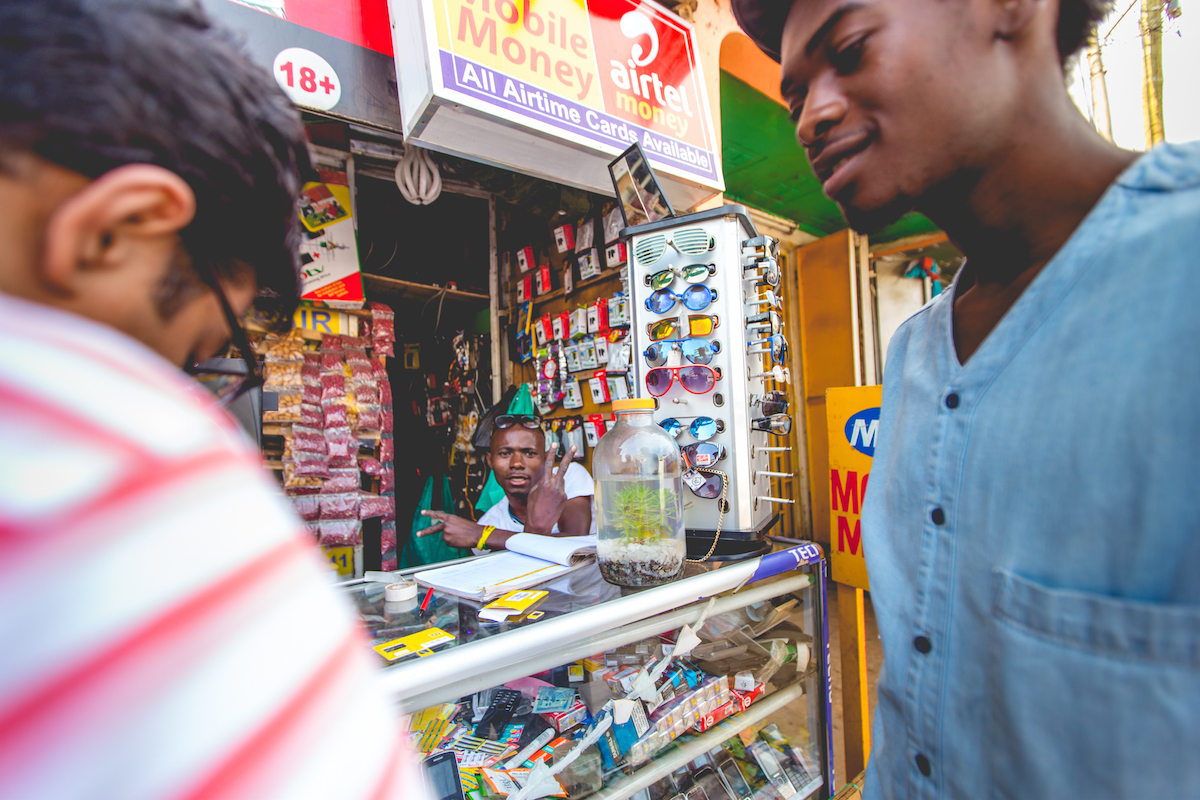 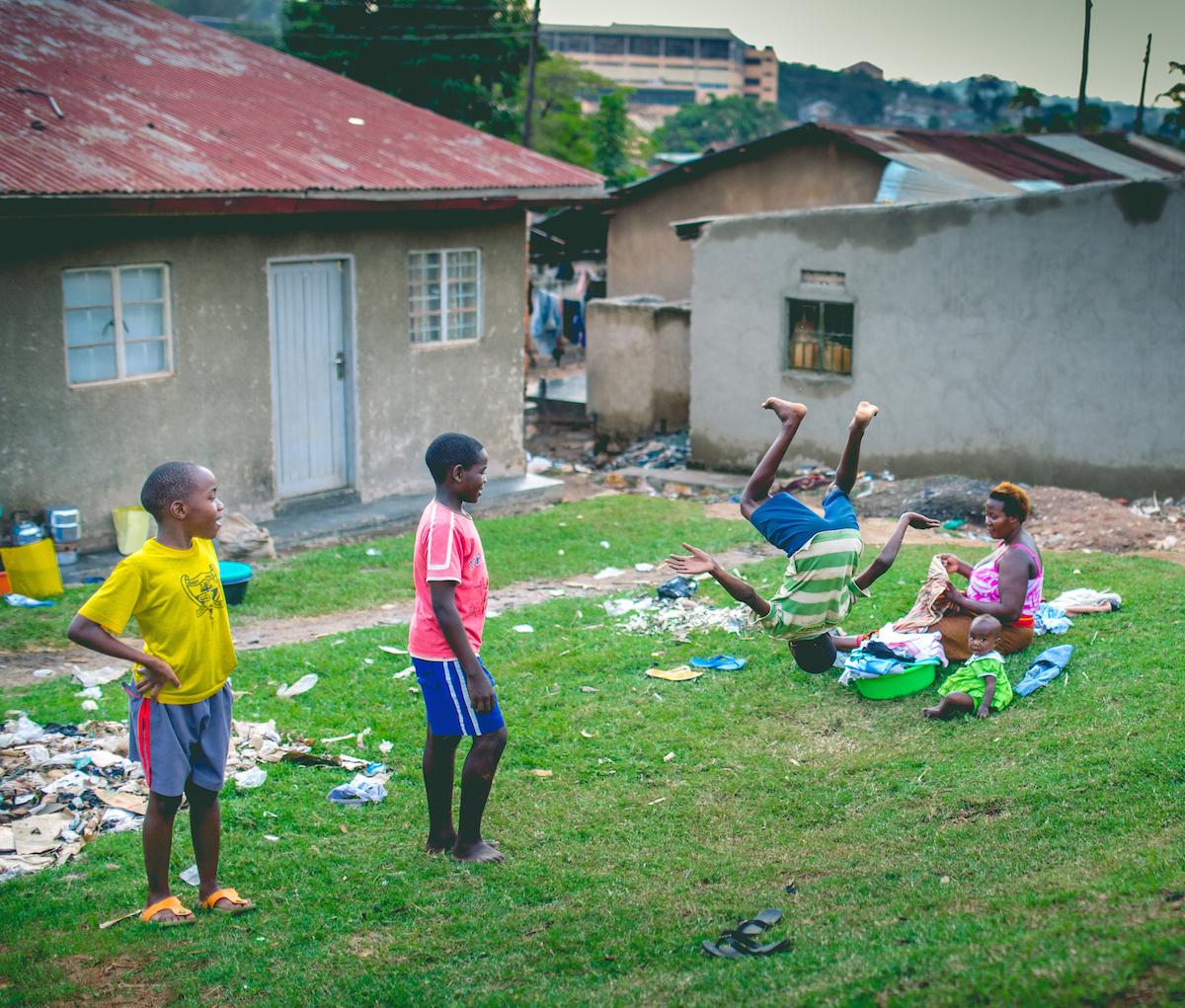 Shanta and I took a bodaboda each to travel to the hotel in central Kampala, where the art auction was to start. Fred, my boda-boda driver asked me where I was from. I told him. ‘Ah India, this bike is from India, right’? he asked me. His bike was a Boxer. Every bodaboda bike in Kampala was a Boxer. Papa had a Boxer for few years. But I wondered if it was a Kawasaki bike. Or Kawasaki Bajaj Boxer. Just Bajaj Boxer, I guess. ‘Yes, this is an Indian bike. My dad had one’, I told Fred. He wanted to know if bike-taxi business happened in India. I told him it happened only in one small part of India, where I lived. And then we were at the art auction. 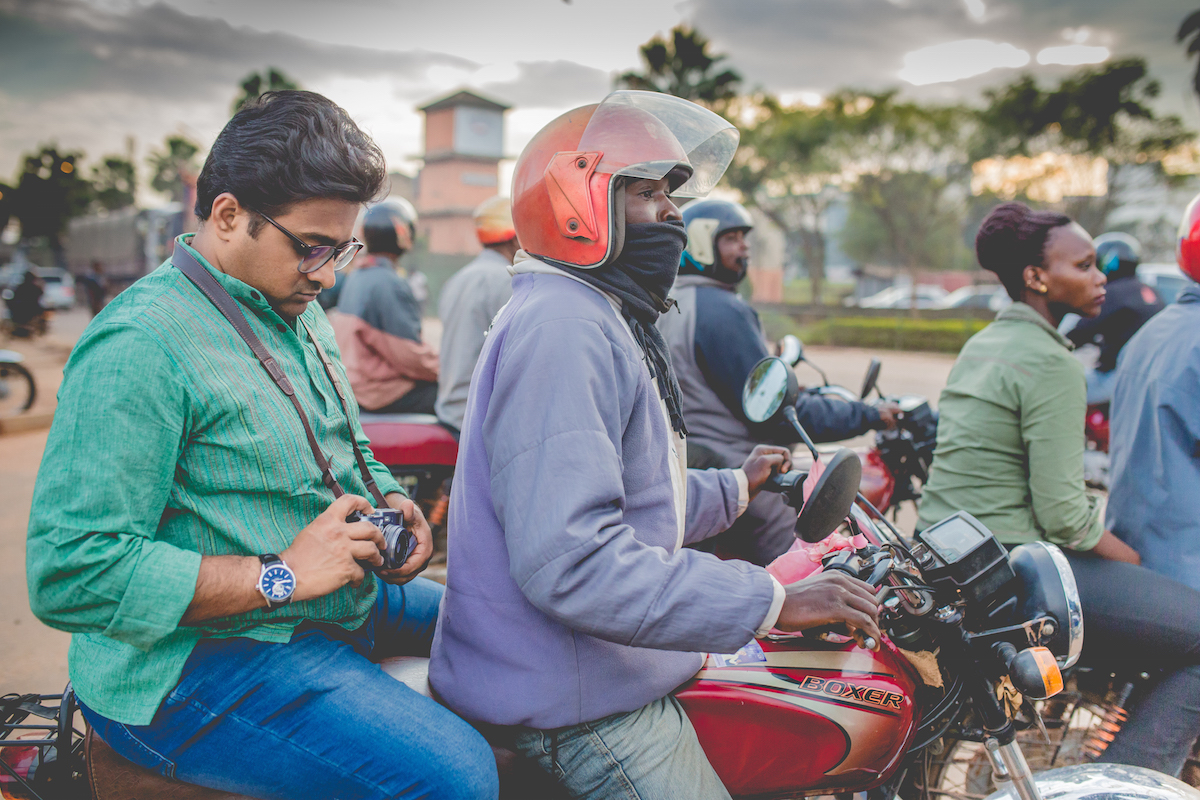 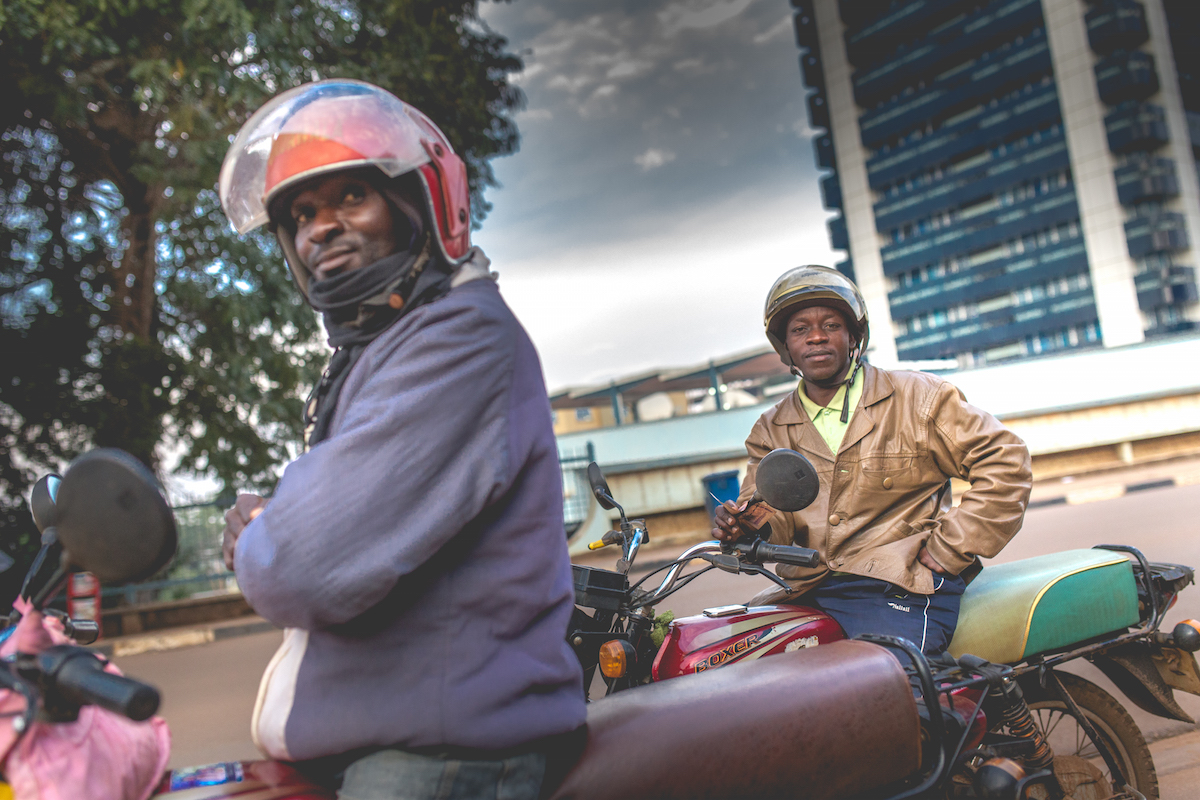 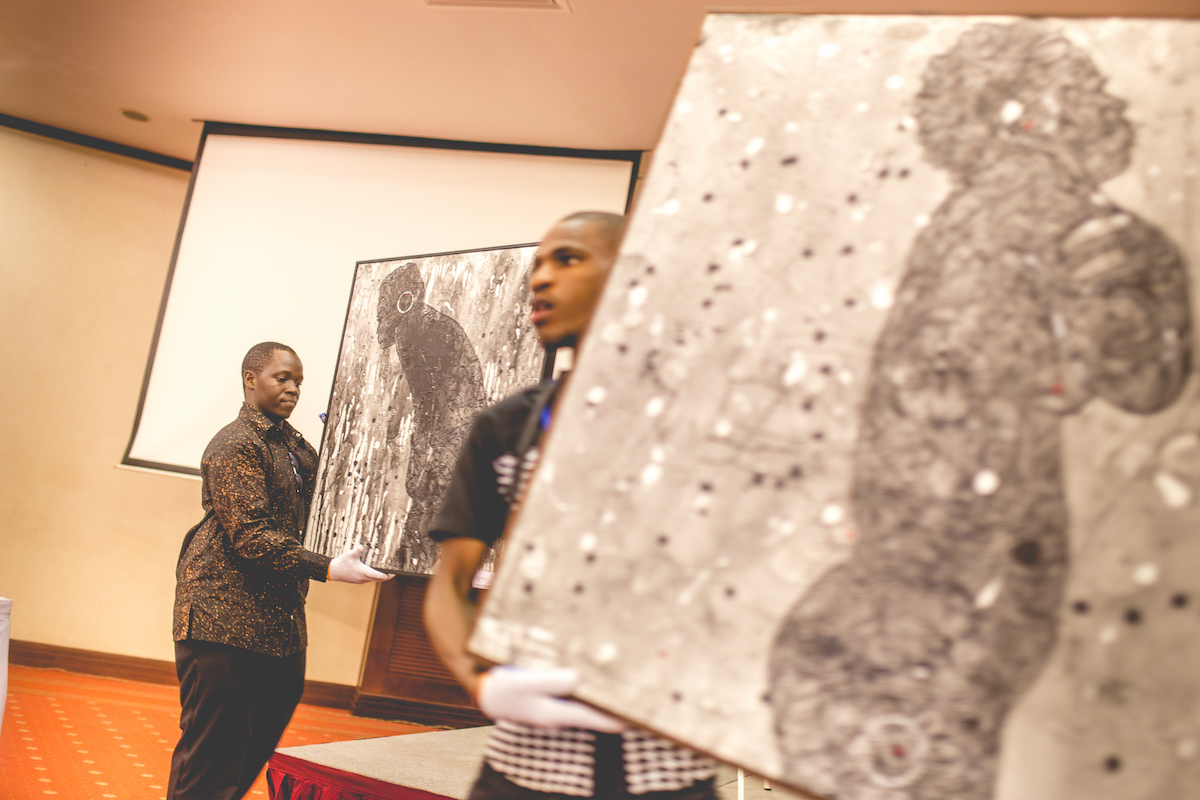 This was the first art auction ever, to be held in Uganda. A bid-war ensued between two ladies, one of them on phone, bidding on behalf of someone in Europe. The war was over a metallic sculpture of a penis pointing towards an ear. The European won. For about three and  half million shillings or so. That is, about INR 50,000. Just 800 bucks for the European. The auction seemed never ending. Our friend Oscar had come and gone already and Shanta and I did not want to wait till every art piece was auctioned. So we left. And decided to walk down the four kilometers to our hotel. And take pictures when we felt like. 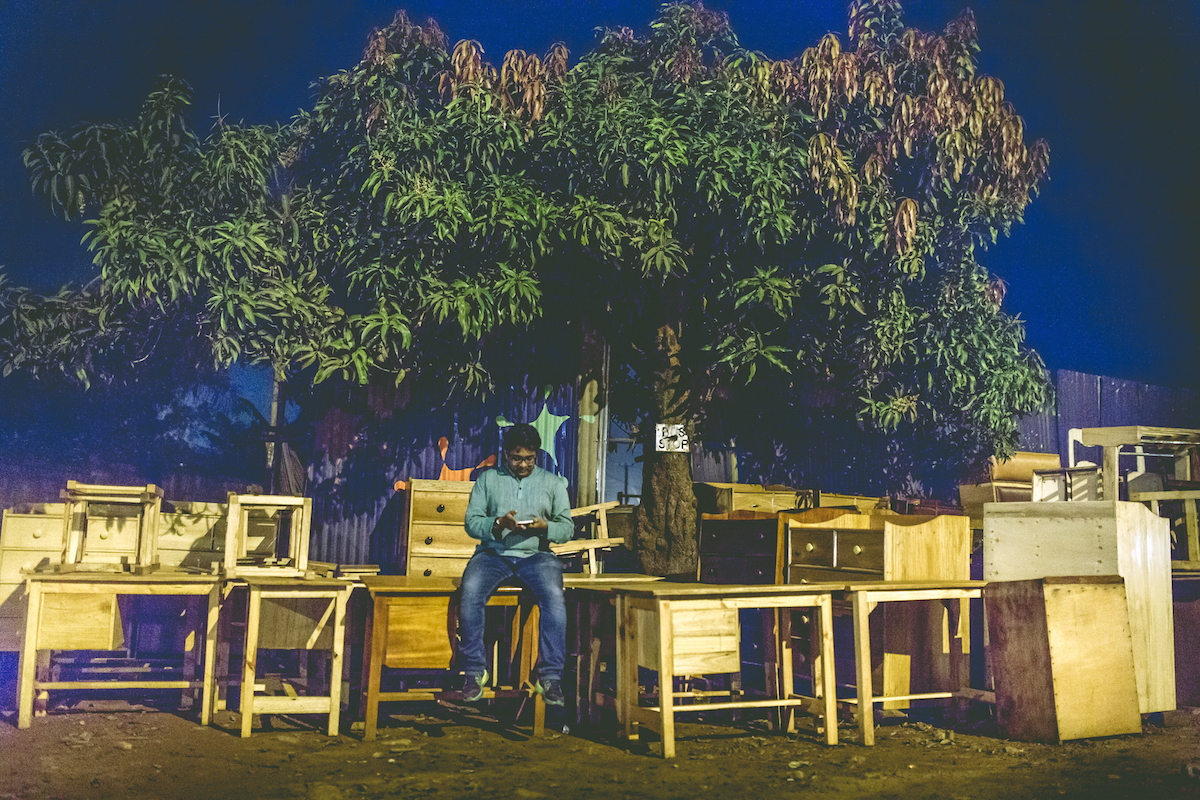 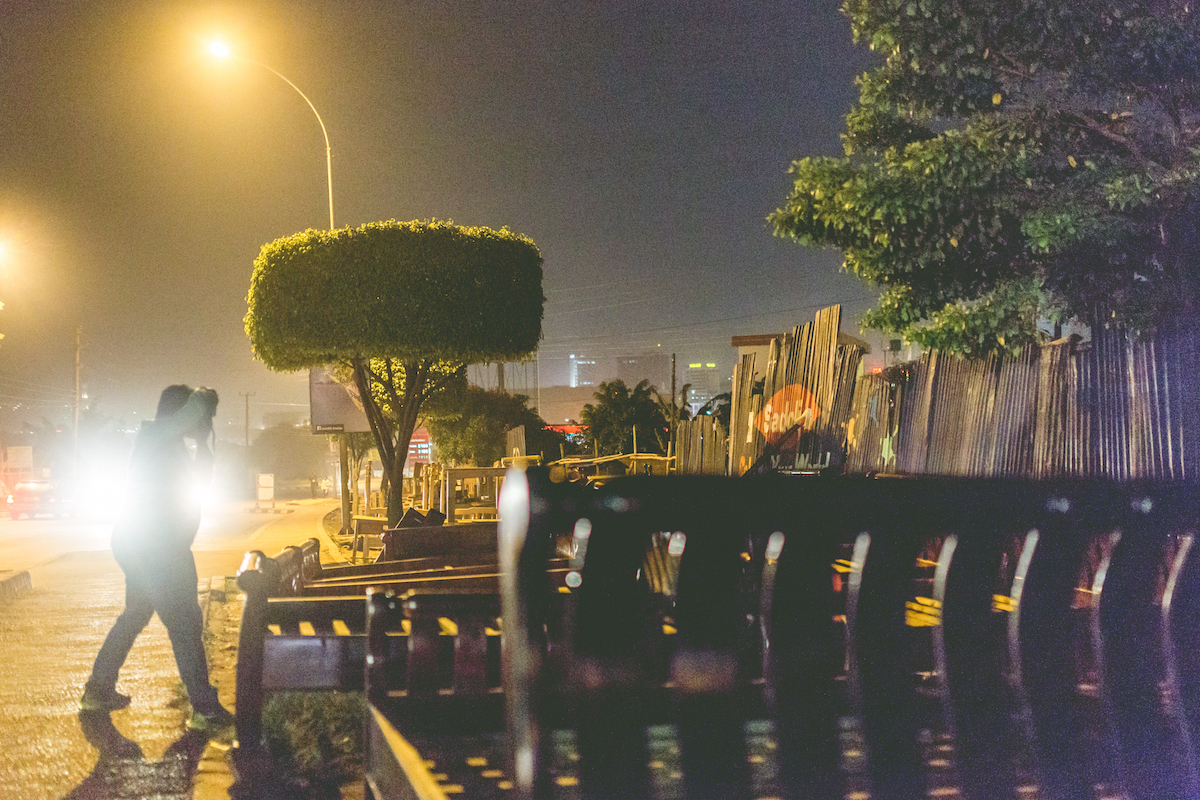 I saw a broken down car on the other side of the road. I bent down to get a good angle. And clicked. But some motorcycle just passed by. I was waiting to get a clear shot before I could click again. And then suddenly someone grabbed my camera from behind and tried to take it away. I realized they were two of them. They pulled me away from the road. Into darkness. I held on to my camera very tightly but was kind of sure that it would be gone. I called out for Shanta’s name to make sure he knew I was in danger.

‘What you shooting, what you shooting? We police. This is police station’, the guy showed some badge as he still held me. They took me to a small 10 feet by 8 feet room on the side of the road. A sign said it was a police station. Shanta followed me inside, still unsure if this was some kind of a trick or if these guys were really policemen. What followed next was about an hour of interrogation. Apparently we were few steps away from the American Embassy where photography was not allowed. So though technically I had not broken any law, I had raised their suspicion. We listened to them, they listened to us and finally at the end of it, we were let go. ‘We don’t want foreigners to think we are bad people. But when we see someone clicking a picture late in the night in a sensitive area, we have to ask questions. If we had not asked questions, we wouldn’t have known you are photographers from India invited by a University here. And that you were walking down to your hotel, from the art auction, and taking pictures as photographers’. The guy explained as he wrote a summary of the same and got it signed by both Shanta and I.

‘We are friends now’? I asked them as I offered a hand-shake.

‘Yes’, they replied, as they shook hands.

‘So can I take a picture of the two of you’, I tried my luck.

‘No, not on duty. But may be tomorrow when our shift gets over’.

As Shanta and I walked away, we realized Uganda clearly has a terrorism phobia. Everyone gets more suspicious and intimidated than you would expect, if you take pictures on streets. Almost every restaurant, club and big shop has a guy with a metal detector to frisk you before you enter. If the place is high-end like a big shopping mall or more sensitive like a petrol pump, you will also find armed security men keeping a watch. And in spite of all of this, the night life is brilliantly active and full of energy and you can listen to music and watch glowing lights till the early hours of morning. Women walking alone in amazing dresses at all times is a very common sight.

This was just our first day here in this country and we already had so much to experience. We reached Club Cheri, got frisked there, took a table, ordered some food and drink and wondered how the remaining several days in Uganda were going to be. 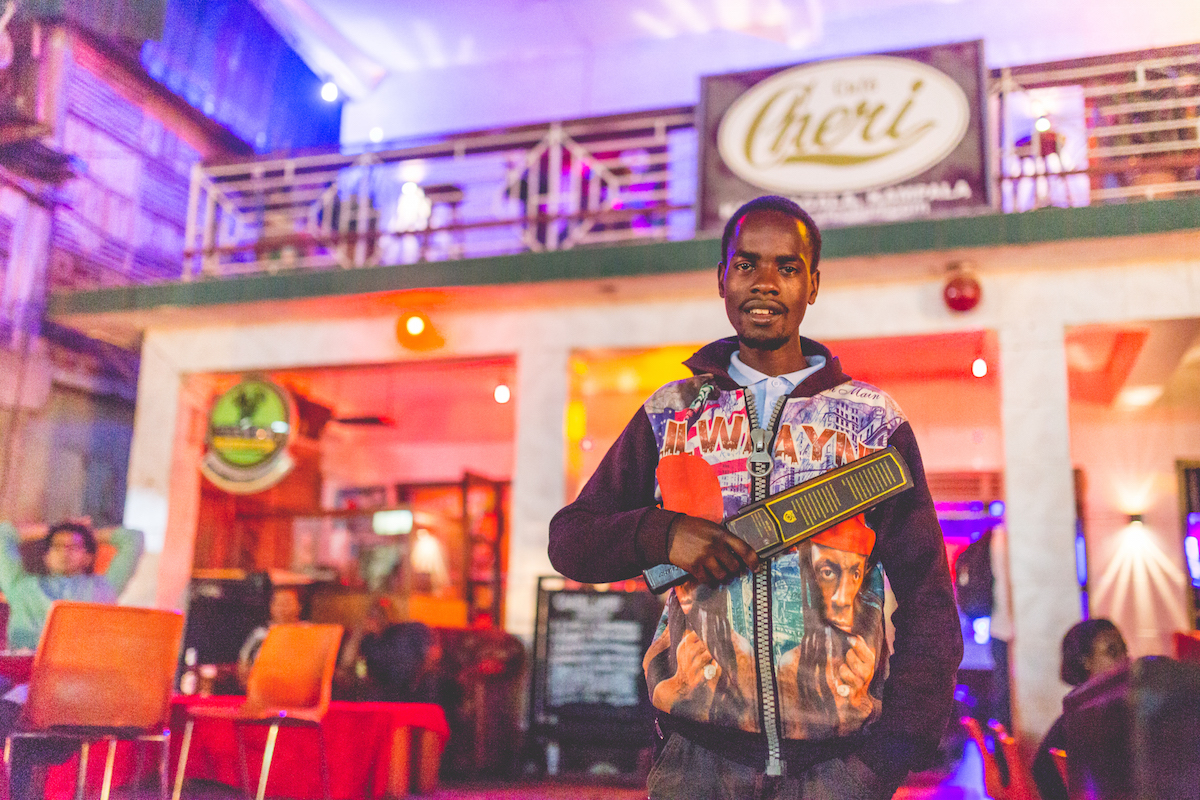 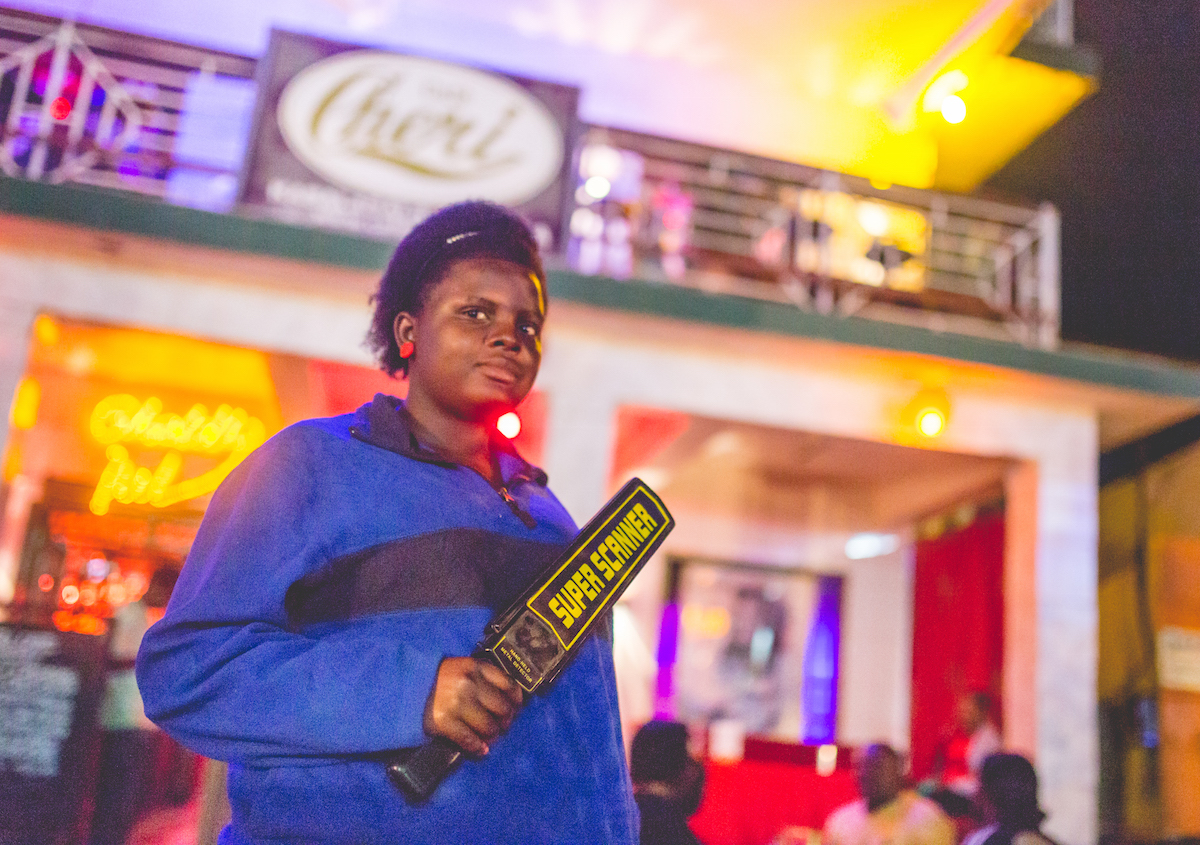