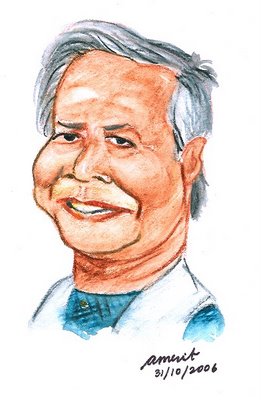 Ok, don’t take it too hard. The caricature that you see above is that of Bangladeshi Muhammad Yunus, the combined winner of Nobel Peace Prize 2006 who shares the prize with his brain-child, the Gramin Bank.

It’s not very clear why an economist (yes he is a Professor of Economics) who used micro-credit to deliver loans to poor, was selected for a ‘peace’ prize and not for ‘economics’! Micro-credit after all, is all about economics! This one line put up on the Nobel Prize website, tries to explain the logic: Lasting peace can not be achieved unless large population groups find ways in which to break out of poverty.

Well, this logic still sounds kind of far-fetched to me.

Dude.. leave the eco and peace aside.. Where is the T-Shirt?? Plz plz send it to me.. Reply me at gmail..